Life Post Google Mobilegeddon-Did it Live up to its Name? 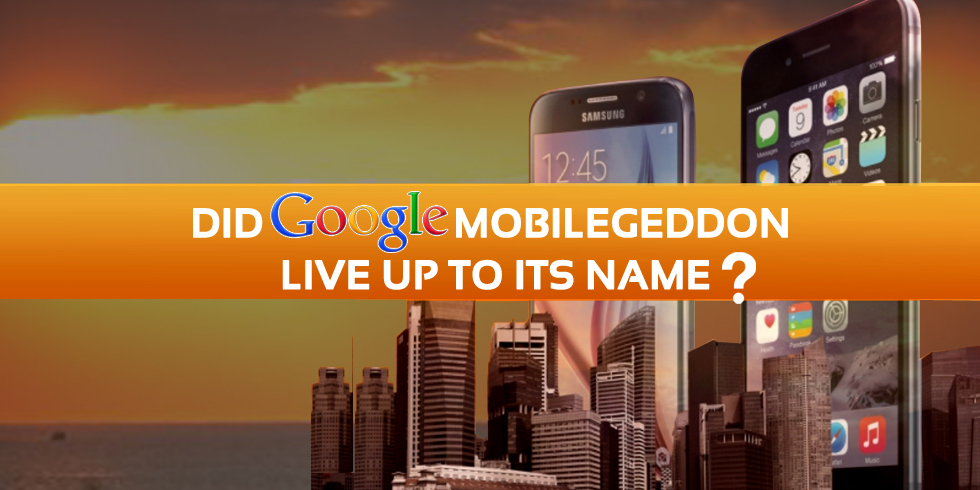 Google’s new mobile search algorithm dubbed as ‘Mobilegeddon’ was feared to bring catastrophic consequences for the businesses having non-mobile friendly websites. The result? Across the industry, many have concluded that Mobilegeddon was overhyped. The hype in large part fell flat, resembling something more like calm after the storm! Google had claimed that the new algorithm’s impact on traffic would be even bigger than the previous Penguin and Panda update. Leading up the update, businesses scurried to catch up (with the times) to make their sites mobile-optimized. Given the lack of results after over a month now, Mobilegeddon seemed to be a hoax cooked up by Google to flex its muscles! Let’s take a closer look at how the new algorithm has been actually affecting the businesses! Mobilegeddon was a drive termed by Google to impose significant implications to any websites that were not mobile-friendly. The motive was to improve the experience of the users on Google mobile. Get a brief recap of the Mobilegeddon update and its expected impact on businesses.

What has been the Result?

According to Search Engine Land, several companies tracking this update didn’t find any significant change. The split between the mobile-friendly and non-mobile friendly sites is only 2 percent. Many non-mobile-friendly sites even outperformed the mobile-friendly sites in the study. Matt Hoff of Seer Interactive says, “So far, what many marketers dubbed “Mobilegeddon” has been more of a drizzle than the destructive tornado some were expecting. The early data I’ve analyzed for our clients — both mobile friendly and not — does not indicate any major shift in the search results or organic traffic … yet. However, a few mobile friendly websites I’ve been monitoring have enjoyed increased rankings over their non-mobile friendly competitors. I have also created a flow chart on Seer’s blog to help with mobile optimization since it can sometimes seem like an overwhelming task figuring out where to begin.” Varied results have come out for different industries; for some there has been a significant increase in their online visibility, for some nominal increase and for some significant decrease! Some businesses have found a double digit percentage decrease in their online presence, while some have got a double digit and even hundreds and thousands of percentage increase in their online visibility!

The Reason behind the Varied Results

Failure to Deliver as per the Expectations

Google had promised mobile-friendly sites a significant increase in mobile search traffic, while those who didn’t adhere, faced the risk of lowered ranking. This had put pressure on webmasters to ensure they were ready for the change. It was envisioned that there would be a comprehensive breakdown of businesses or a business having a mobile optimized site will be successful in getting higher ranks. This made many businesses to incorporate changes, prepare themselves for the update and make their site responsive to see a positive impact. But many were disappointed after the Mobilegeddon was implemented. Weeks after the original announcement was made, the search giant issued a subsequent blog post, which read: “While the mobile-friendly change is important, we still use a variety of signals to rank search results.” Webmasters waited for the results after the update, but they were disappointed. They didn’t find any ‘significant impact’ that Google had promised. This made the webmasters and search professionals across the globe call the update as somewhat ‘contrived’. It is also claimed that this shallow impact is due to Google’s decision to taking a “slow rollout” approach. However, it has been more than a month, any slow rollout would have concluded by now.

Google is a search giant and if it announces that its downstream traffic to your site will be significantly affected by an algorithm change, it needs to stick to it. These announcements directly impact the revenues of most of the webmasters. They need to be clear about what they should do and what will be the outcome. Google should be clear with the webmasters on a strategic vision and keep a less divisive approach so that both the parties can work effectively. Google no doubt was successful in increasing the mobile-friendly web pages by hyping the update and emphasizing on the need of websites to be user-friendly. But beyond that, though, it doesn’t appear that Google gave out many punishments as such.

Importance of Mobile Sites to Businesses

More than 60% of consumers research on their mobile before they buy anything. The Smartphone’s staggering adoption is transforming the way we make online purchases. The reason for Google’s update is to favor consumers. It is always important for businesses to have a mobile optimized site to engage their audience, meet them where they are, and make it easier for them to interact. Then there’s user experience. Responsive design gives optimal cross-device viewing experience to users, thus increasing your chances of sales. Those involved in eCommerce businesses are also benefitted as Responsive design leads to quicker purchase decisions. If your business is following a social media strategy, then it is important to note that people generally use social platforms on their Smartphone’s.

Stay on the top of mobile optimization. Search on Smartphone’s have increased and that makes optimization increasingly important. It’s a good idea to go ahead and invest in responsive design. This will eliminate the worry of getting affected by Mobilegeddon. No doubt the impact of the update was minimal; but there is a widespread adoption of responsive web design. Mobilegeddon didn’t turn out the way most people had expected but this hype is just another example of how the SEO industry has become overdramatic! It also gives us insights into what we can expect from Google in the future: more transparent approach and a fewer radical game-changers! Semaphore Software has expertise in developing world-class responsive website  to its clients across the globe! Get in touch with us through info@semaphore-software.com to connect to our designers providing comprehensive consulting services for your websites and webstore!