Why You Should Opt Minimal UI Design for Making iOS App 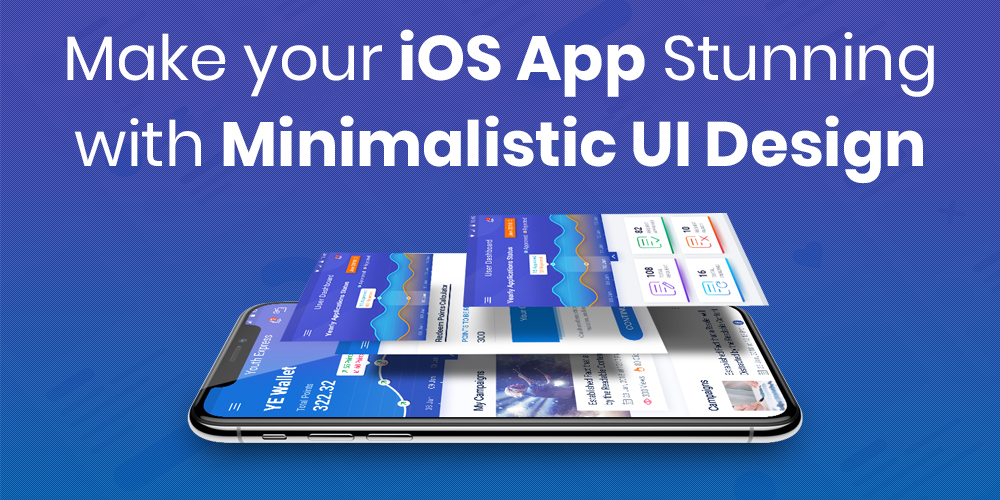 In today’s time, mobile app designing has turned itself into a separate industry which currently has worth millions of dollars. It’s essential for web-based as well as the mobile based app to leave a good and long lasting first impression on the app users by explaining the statistics. The user will get the exact UI and mobile app design as required. There are lots of reasons why UI is gaining much importance as it’s directly connected with the fact that users will uninstall your app without even relating it or judging the UI and app design.

Apple is always set to shake the industry and will change the game in the new launch event. Whether its iPod of the year or a MacBook Air, it is known for its out of box way creating products. With the release of the latest iPhone X offering it was clear that the Company was showing no signs of changing its tactics. This time the new paradigm will create a world of glass by creating this elegant device. To develop simple doesn’t mean primitive, here we’ll be discussing Minimalism where we have seen different spheres of life and work along with varying directions of design.

Minimalism comes with a broad meaning that is characterized by extreme simplicity and sparseness. It got famous within a short duration of time. They tend to use the negative space, font combinations, bold color and other multifunctional details with making it merely elegant. Due to this, not every designer take a risk in trying this direction and the rest of them don’t find ways to shows much fewer elements

There are many popular mobile apps achieved by minimalist design with following the minimalist UI design principles along with removing additional imagery color and design. Using app UI design, one can keep the page structured clean with delivering essential hierarchy design components. With this, we can say less is more where the primary goal is the same which gives fewer design elements. With using minimalist UI design, one can make sure that they can integrate user studies in the design process with creating a clear and intuitive design.

Also Read: Why You Should Opt Minimal UI Design for Making iOS App

Minimalist UI design comes with several features that include defining characteristics along with analyzing sites and optimizing the business objectives. The whole design idea was to support business goals and get profitability. Some of them are listed below.

If we look at the past few years then, we can see the overwhelming shift in the design community that gives highlights, gradient, and shadow to make the UI element look glossy and of three-dimensional.

In most minimalist UI design we help you to create visual interest without adding any additional design element or any actual design. With using fewer color palettes, we deliver essential site’s impact with intended to avoid upstaging the content.

Large typography communicates to a few elements which exploit few elements with making minimalist design and feel visually engaging. It comes with different variations whereas in font size, style, and weight by understanding the hierarchy of the text.

We have found that there’ll be 40% interface used grid layout that organizes the content that separate minimalism design for an application that certainly adds design appropriately. Grids are an effective method that works linearly and without adding visual elements.

There are design experts who are suggested to have rounded graphic elements where the component of minimalism will have 15% of the sample used in it.

Several websites reduce global navigation in a desktop presentation that comes with incomplete mobile-first design strategy. It fails to consider that the need with extra screen space will be available for desktop users which results in minimalist UI design.

With embracing the minimalist design one can understand how mobile is different from the desktop from a design point of view. A mobile user’s primary focus will be added in the completion of the task which uses mobile apps on the go. Unlike desktop and laptop, get some consistency where each model varies in screen size. Make sure you click to the next action on a mobile device where you don’t have to an intermediary like to use the trackpad.

The UI design is a complex part of app development, which requires not only knowledge of designs but an understanding of customer behaviour as well. If you are looking for an iOS app developer who is skilled at developing apps with minimal design then you can contact us. Semaphore Software offers mobile application development service for iPhone app development. Contact us to know more about the industry verticals we work for.