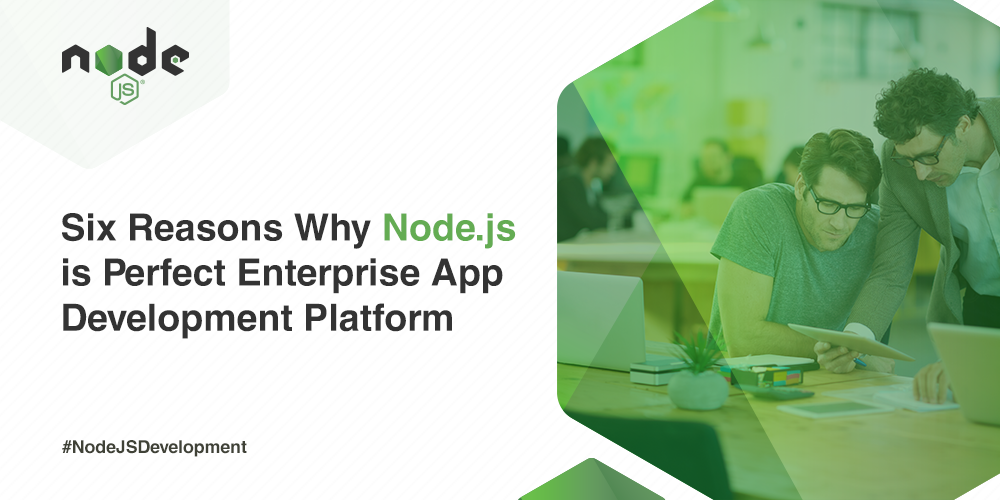 In today’s technology-driven age, intense competition has become a new norm. It has compelled companies, big or small, to come up with customized enterprise-grade applications. Such apps can enhance decision-making skills by providing real-time intelligence. When it comes to developing an excellent enterprise app, any reputed front-end development company will prefer the Node.js platform.

In recent years, Node.js has shown its ability as a reliable and robust app development platform to fulfill the diverse requirements of modern businesses globally. This is one of the major reasons for its remarkable growth as a cross-platform JavaScript run-time environment. Any reputed front-end development company prefers Node.js for developing high-quality real-time apps. Top companies like LinkedIn, Netflix, and Uber have relied upon Node.js for their mobile apps

The following graph shows that almost half of developers have used Node.js worldwide in the year 2019.

Many established companies have already adopted Node.js and startups usually hire Node.js developers to make the most of this platform.

Let’s dive deep into the reasons for the growing popularity of Node.js.

Today, around 58% of the total development time is spent in using Node.js globally. This phenomenal growth in the usage of Node.js is attributed to many reasons. Here we mention just a few of them.

Node.js is built upon Google Chrome’s superfast V8 runtime. The platform is frequently updated with security patches and performance enhancements in line with V8. What’s more, Node.js has a single-threaded, event-driven architecture to handle multiple connections at once. Unlike most of the popular web app development platforms, Node.js operates on a single thread while making the use of the event loop and callbacks for I/O operations. It enables the platform to handle hundreds of thousands of connections simultaneously.

Startups hire Node.js developers to start with either a small, basic app or the MVP. Over the period, when the new features are needed to be included to meet the user’s expectations in the enterprise applications, the Node.js platform can efficiently handle it. This platform works on the microservices pattern. Now, microservice is a single, self-contained unit to make up a large application. This pattern enables the front-end development company to keep their teams in different countries for working on different parts of the same application.

The Microservices pattern in Node.js enables developers to deliver enterprise-level applications with better performance and less code. PayPal and Netflix are noteworthy examples of such applications.

As mentioned above, it is possible with Node.js to build different teams for working on different aspects of the same app. For example, such cross-functional teams remain busy in writing code, testing, hosting, and maintenance of the same enterprise application. These teams have experts in various domains like front-end and back-end development as well as quality assurance. It is possible to implement more innovation and smoother collaboration with small and cross-functional teams. As a JavaScript platform, Node.js can easily fill the gap between the front-end and back-end skills for app developers.

Do you know that Node.js can help you develop a cross-platform desktop app? When you hire Node.js developers, they can use some of the code of your existing web app in its desktop versions. These versions can be seamlessly run across Windows, macOS, and Linux. In a way, the same team can help you come up with a desktop app version of a web app. Also, Node.js developers have access to Google Chrome Developer Tools that enable them to debug back-end and desktop apps like client-side apps efficiently. Mostly, the Node developer tools are also cross-platform that enable them to write a macOS app without using a Mac.

Enterprises that believe in innovation have put trust in the capabilities of Node.js for improved performance and high coding efficiency.

An npm enables developers to install, update, and use smaller modules or software packages. It facilitates them to get rid of writing common features from scratch while avoiding layers of complexity. The Enterprise version of npm focuses more on privacy and security. Big companies may hesitate to store their confidential data in the cloud. There, npm Enterprise offers a secure and robust infrastructure to run behind the company’s firewall. Advanced security features and access to a private registry can help companies control access to code and identify vulnerabilities.

The npm Enterprise enables developers to take advantage of open-source code from the Registry or use npm to share their code with colleagues.

Let’s face it! We witness a continuous change in modern technologies. The front-end development company may find it difficult to develop or maintain an application written in an outdated language without long-term support (LTS) of the respective technology. Node.js offers long-term support and as many as 61% of programmers consider it an important feature. It allows Node.js developers to plan further development as per the timeline and project requirements. It is easy to adopt new versions based on regular development cycles. LTS is a big move of Node.js to maintain complex enterprise applications. It has opened the doors of opportunities for developers and new possibilities for enterprise clients.

In a nutshell, Node.js facilitates developers to become full-stack experts. The platform brings exciting possibilities to the table for developers and entrepreneurs alike. In the coming years, we can certainly expect that Node.js will continue to impress developers with its excellent functionality and versatile environment.

At Semaphore Software, we provide 360-degree development and support services for the Node.js platform. As a leading front-end development company, you can count upon us for feature-rich and user-friendly web solutions using Node.js. Contact us at info@semaphore-software.com to know more about our services.