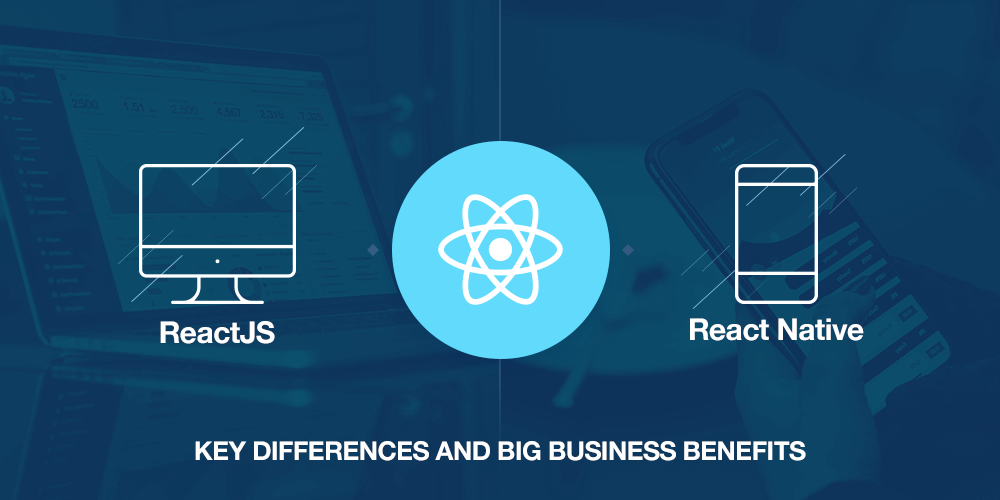 Now comes another term- ReactJS or React.js. Many people believe that React Native and ReactJS are the same. But, let’s clear here that when you hire ReactJS developers, they may not make cross-platform apps! Read on this post to clear your doubts as we are going to discuss certain differences between React Native and ReactJS from the viewpoints of structure and use cases.

Let’s start with the obvious question.

It is a JavaScript library designed to build user-friendly and responsive UI components. ReactJS is also known as React in short, and it is responsible for the rendering of user interface (UI) components technically. The library supports both front-end and server-side processes.

What is React Native?

React Native is a JavaScript framework or platform to build cross-platform apps with native characteristics. React Native has no role in developing UI. But, that’s not all. Here we compare both ReactJS and React Native to understand the similarities and differences between these two concepts.

• Set up and Workflow

As mentioned above, ReactJS is a JavaScript library. It is useful for web development and UI development. When you hire ReactJS developers for a new project, they choose a Webpack first, which is a bundler. After selecting the bundler, developers will decide which modules will specifically suit the project requirements.

In React Native, developers need to start from scratch. In other words, they have to set up everything first before developing an app. It is easy and rapid app development platform. Developers need to run just a single command line in terminal to start coding. As React Native is a framework meant for developing cross-platform mobile apps, it is necessary to use Xcode (for iOS apps) and Android Studio (for Android apps) to run the app.

React JS can come up with live animations with the help of CSS. It shows that ReactJS is mostly web-oriented library. React Native, on the other hand, takes the entirely different, mobile app-specific approach. Here, React Native app developers animate components by using the Animated API. A well-known JavaScript library Veloity.js is also useful for building animations. It enables app developers to build assorted animations.

ReactJS allows developers to play with animations, whereas, React Native offers freedom to come up with innovative animations.

Rapid app development is one of the biggest benefits of React or ReactJS. It offers a few great tools for developers while giving them get rid of installation. It can save a lot of time and effort. Also, ReactJS enables hot reloading to enable developers to make small changes to the app style and theme.

You can hire ReactJS developers to leverage the benefit of Live Reload. This feature makes it easy to add big changes in the app logic, and your app can reload when developers change its code.

React Native developers also use many tools available in ReactJS. For example, Chrome Dev Tools are present in ReactJS that are necessary for inspecting network requests and debugging. Redux DevTools can also assist developers for inspecting elements. But, the native inspector is not much useful in React Native because it is not possible to inspect DOM during React Native app development process.

After going through key differences, it’s time to jot down the business benefits of both ReactJS and React Native.

In brief, components are different in both React Native and ReactJS, but syntax and workflow are similar. It is better to contact a reputed ReactJS development company to know more about them.

ReactJS is a JavaScript-based library and React Native is a framework to build cross-platform mobile apps. Simply put, ReactJS (or React.js) is a core of React Native that includes all the principles and syntax of React to make a learning curve easy. When it comes to build a dynamic and responsive UI with high performance, ReactJS is helpful and when you want to give your business mobile app a native look and feel, React Native remains handy.

Semaphore is a leading ReactJS development company. We have an in-house team of experienced and dedicated developers who have worked on a number of web and mobile app projects across different industry sectors. If you have any requirements for your next web or mobile app project, just send us an email at info@sempaphore-software.com. Our expert business consultants will contact you shortly to discuss scope and business benefits.