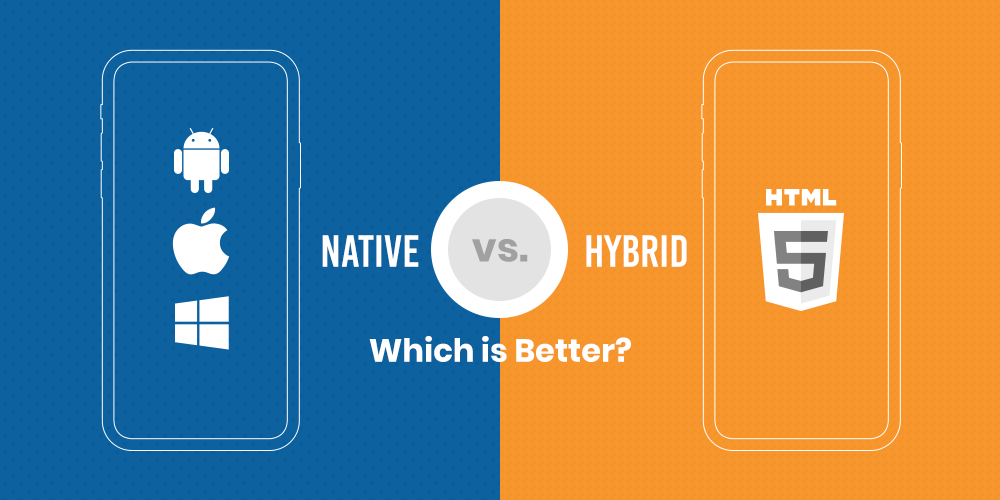 With the increase in adoption of smartphones, it is predicted that smartphone users globally will get to 2.87 billion in the year 2020. So, the usage of the smartphone market will further boost, and native vs. hybrid apps development discussion will still remain for some more time intended to app developers.

Also, in the last year, 194 billion applications were being downloaded worldwide. And this statistic is sufficient to comprehend how quickly the application development industry is growing.

In the initial days, application developers were restricted and had limited reach to just native platform-based apps which were unable to work on diverse systems. The rising requirements for mobile application development brought fresh ideas that can be used for reducing the development period. And cross-platform development came into the picture. However, still, the question prevails whether native app development is better or building hybrid apps.

Native app development is poles apart than mobile website development. Here, browser behavior and compatibility do not matter much. You can directly utilize the native functionalities of mobile OSs to enable the features needed by your application. The native development assists in building applications for platforms such as Android, iOS, Windows, and Blackberry. However, when you develop the app with the native platform it will work on just a specific operating system. So, the developers need to build diverse versions of an application for altered systems.

Hybrid applications are web pages placed in the native browser. They are developed and then wrapped in a native app utilizing platforms. This empowers you to utilize web-native framework and there are ample of these.

Let’s explore the advantages and disadvantages of Hybrid Apps vs. Native Apps

These apps are built for a particular platform. So they are exclusive, optimized and display an enormously high level of performance.

As built for a single operating system, crafting native mobile apps are a better way to assure that its user’s data would be better protected and are secured.

Native apps thrive to their devices’ OS interfaces, turning them to be an integral component of the device offering better user experience.

It’s tough to handle two diverse apps in single codebase compared to two apps in two different codebases. So, the foremost which imply native apps have lesser dependencies on bugs and the later scenario many times slows development speed.

For developing a native app you need to hire added developers with exclusive skill-sets ad richer experience. Also, it involves extra time and efforts when compared to hybrid apps.

If a new update is about to be released, developers need to initially enter these updates to the app store and then wait for the users to update them applied to the newer versions.

The lightweight hybrid app UI lends a hand in loading graphics and content swiftly. It also provides a steady and faultless user experience. These apps showcase and deliver quicker data streaming. The exceptional UI experience even enhances the approval opportunities at the app store.

As we discussed above that if you are stiff on budget, then hybrid app development is the most excellent selection for you. There is no requirement for you to hire numerous programmers to work on varied OS platforms.

The offline support assists the end users to have nonstop access to the application’s data without any of the performance issues.

Straightforward and quicker development saves time. Once the code is being prepared, the app can be run on both iOS and Android.

They utilize plugins to way through the built-in functionalities of a device. The shortcoming of such an approach is that those plugins can be erratic. Furthermore, developers are required to build plugins if they are not ready leading to extra efforts.

The additional layer leads to debugging issues. The developers depend on the in-hand framework to work effectively on the used OS without setting up any sorts of bugs in the application.

Both the apps have their own benefits and shortcomings intended for app development services. However, in most of the cases, native app development is healthier than hybrid app development. Well-tracked native mobile applications can significantly assist you to accomplish your business objectives. They get better ratings in app stores and have more number of downloads. However, the users are the eventual decision-makers and you have to offer them with a brilliant engaging app with greater experiences.