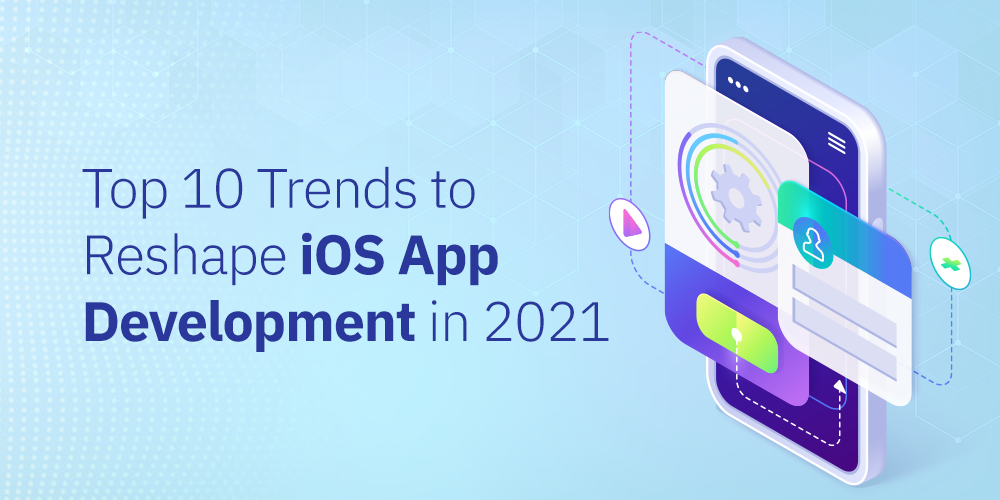 Year 2020 remained challenging for every business and industry sector. In 2021, we have gradually learned to live with the pandemic while focusing on the post-pandemic period. Thankfully, advancing technology remains at our side during this testing time. Talking about the mobile platform, it has gained traction like never before amid social distancing and lockdown-like situations worldwide. As a result, both Android and iOS app development domains have witnessed steep growth.

One of the key reasons behind this growth is both the OSs come up with constant improvements during this period. Let’s go through the top iOS app development trends that we can expect in the year 2021 and beyond in this post. You can hire iOS app developers to get more insights on these trends and their successful integration in your customized business app.

Top iOS App Development Trends for 2021
Every year, Apple’s fanboys wait for surprising innovations and improvements, and the Cupertino Company has never made them feel disappointed. Here are the top iOS app development trends that are all set to dominate in the coming years.

1. AI with Siri
Siri is getting more advanced with evolving Artificial Intelligence (AI) technology. Apple has already released SiriKit for iOS app developers to enable them to build iOS and WatchOS apps that work seamlessly with Siri using voice. This feature is useful for app users to perform hands-free operations and access from the lock screen also. A new shortcut app section shows apps integrated with Siri in the iPhone.

2. CoreML
Designed mainly for leveraging the benefits of Machine Learning (ML), CoreML (Core Machine Learning) framework will gain ground in the iOS app developer’s community. Apps built on CoreML are quick to react and faster than other general iOS applications. When you hire iOS app developers, they can integrate Siri, the iPhone camera, and QuickType can be easily integrated using CoreML.

3. HomeKit
As per BI Intelligence research, it is expected that there will be over 24 billion connected devices by 2021. This prediction indicates the growing importance of IoT. Apple has launched HomeKit to make the most of IoT in iOS app development. You can hire iOS app developers to make IoT-powered apps. In other words, IoT devices can share information with mobile devices or iPhones using the app. Users can setup within their house from remote places with the help of Siri and HomeKit.

4. ARKit
ARKit has advanced features to make the most of AR technology. Its latest version ARKit 2 has several improvements including enhancements for face tracking and environment texturing. It is also possible to detect 3D objects in a scene with the help of AR technology and ARKit. iOS app development companies can use ARKit to build highly interactive and engaging AR-based games.

5. Security
For any mobile apps, data security remains a big issue. It is possible for hackers to steal confidential data of the users including financial details from apps. Therefore, it is necessary for mobile app development company to follow standard practices. Apple has created App Transport Security for every new iOS app to keep the app secure.

6. Swift
All iOS app developers just love Apple’s Swift. It is one of the top programming languages for developing advanced apps. Its newer versions like Swift 5 and upcoming Swift 6 can be certainly considered as one of the popular development trends. As an easy-to-learn and flexible language, Swift 5 can bring more advantages and opportunities for iOS app develoeprs in the coming time.

7. CloudKit
Cloud computing is getting mainstreamed quickly in modern enterprises. Talking about iOS app development, CloudKit can be one of the most promising trends for this reason. With over 1PB of free storage, iOS app developers can store their entire app data in iCloud with real-time syncing ability. Improving Apple cloud service is also beneficial for developers and entrepreneurs alike.

8. iOS 15
Every year, Apple brings new iOS version and a couple of new iPhones. Businesses have to migrate their existing apps to the latest version to ensure optimum performance. This year iOS 15 has released with several improvements and innovative features. It is better to hire iOS app developers to migrate your existing iOS 14 compatible app to iOS 15 to offer excellent experience to your customers.

9. Apple Pay
Apple Pay is all set to replace physical wallets. It is worked around the world along with Apple devices. In the coming years, this digital wallet will get more advanced and secure. The plus point of Apple Pay is it eliminates the need to save card details, thereby offering the utmost security to users.

10.  Privacy Updates
With every new iOS version, Apple brings new privacy updates to make Apple devices and iOS apps more secure than ever. We can consider it in the development trend because these updates need to be integrated into the customized iOS apps. For example, iOS 14 privacy updates have brought changes in store-level control and modification in app install attribution.

Here we have seen the top trends that can influence the development of iOS apps in the near future. However, time will tell us how these major trends and other concepts will impact iOS app development process.

Concluding Lines
iOS app development domain is teeming with activities. All these trends are going to reshape the entire development process in the year 2021 and beyond. All you need to hire iOS app developers to get an advanced and user-friendly app that has integrated these trends. In this competitive business scenario, an appealing and future-ready iOS app can make all the difference while offering you an edge over peers.

Semaphore Software is a leading outsourcing services provider in the USA and India. We offer end-to-end services in the domains of iOS app development, cross-platform app development, and Android app development. Our in-house teams of experienced developers can build seamlessly performing enterprise apps with desired features. Want to know more about our services? Just send us an email at info@semaphore-software.com and we will get back to you.