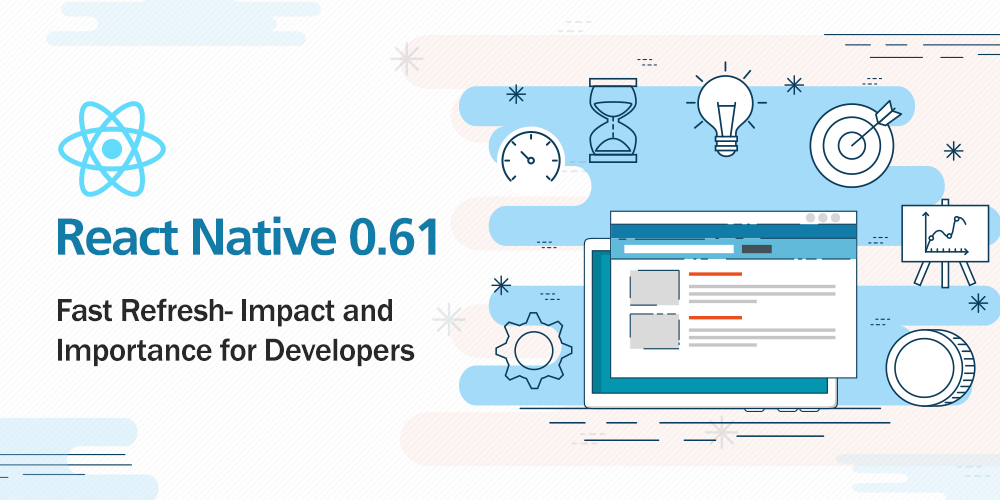 React Native 0.61 is released with a new reloading experience known as Fast Refresh. It comes as a solution to the React Native community’s one of the biggest pain points- broken “hot reloading” feature. Here we are going to see its impact on app developers and ReactJS development services as a whole.

At the beginning of the cross-platform app era, developers had to struggle with conventional methods like Native technology to make native-like hybrid apps. They had to write separate code for each and every platform. For example, if a developer wanted to make an app for iOS and Android OS both, they had to start everything from scratch to build the same app. React Native has introduced WORA (Write Once Run Everywhere) functionality to enable developers to get rid of this problem.

Developed and backed by Facebook, this platform has gained immense popularity because of native features and excellent functionality. However, it is fair to mention that React Native has also some cons that may impair React Native and ReactJS development services at times. Let’s make a list of some of the most prevalent issues of React Native.

When you hire React Native developers for your app project, you may find them dealing with the issues like-

• Update is time-consuming- When it comes to upgrading one version of React Native to another version, the process always remains tedious and needs a lot of time. If developers have failed to install a few updates and want to complete the process at once, then it is very much time-consuming

• Finding cause of exception- React Native has a stack trace in the Chrome debugger console. It leads to time-consuming debugging and component DidCatch also does not provide much help. In such a scenario, React Native developers find it hard to find the main cause of any exception in the app

• Hot Reload Issue- This is one of the most popular features of this framework. But, unfortunately, it failed to work properly with SFC (Stateless Functional Components). Thankfully, the React Native 0.61 version has fixed this issue once and for all. It has made easier to reload any React Native code without reloading the entire app

• Crash- React Native apps crash many times, and the platform does not provide much information about the reason for the crash

• Ram bundle- ReactJS development services can get a big help if the ram bundle of React Native supports any OTA platforms like CodePush. This issue is due to a lack of a widely connected developer community.

React Native 0.61 is introduced as a solution to these persistent issues. For example, in this version, the React developers have unified the “live reloading” and “hot reloading” features into a single feature called “Fast Refresh” to address the ‘Hot Reload” issue.

Hook is a new feature that offers and subscribes to dimension updates. This feature can replace the Dimensions API as well.

This update has many improvements in the UNSAFE_lifecycle methods.

As discussed above, this signature feature is a combination of two existing features “live reloading” and “hot reloading”. Now, let’s go through the impact of Fast Refresh feature on ReactJS development services and React developers.

React developers have tested this feature and acclaimed it as a highly reliable and flexible one. It is not easy to put the framework in a position where developers need to reload it manually. Fast Refresh has made it possible by working properly for both class and functional components. Though Fast Refresh looks the same as hot reloading, it performs the task excellently. All these features and improvements are going to make the React Native app development process more efficient in the future.

How to upgrade to React Native 0.61

The advent of React Native 0.61 has a major impact on ReactJS development services. On one hand, it has successfully attempted to address some of the common issues of developers, and on the other hand, it has made the development process simpler and swifter than before. You can hire React Native developers from Semaphore Software through a flexible and scalable engagement model. Our dedicated developers are capable of handling the app project of any size to meet your diverse and complex business needs.