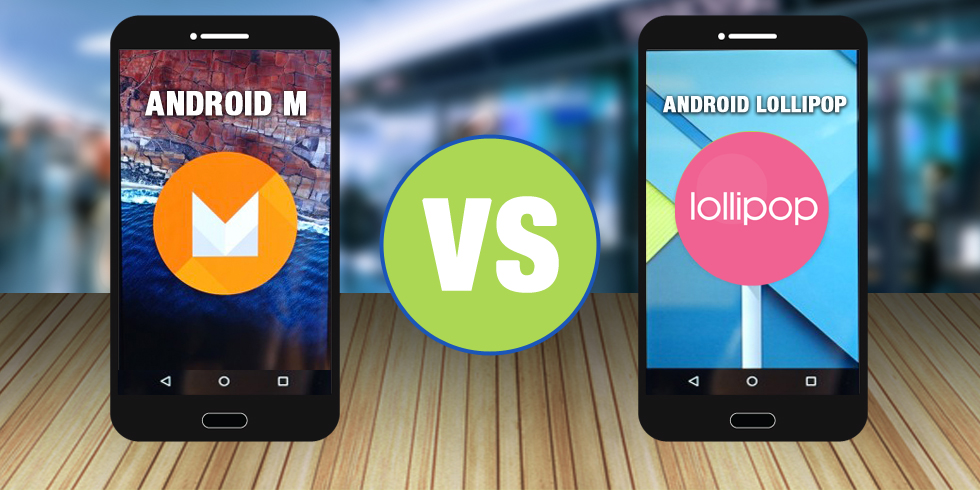 Google had announced Android M at I/O 2015, which has come out with a host of new features. Have a look at the top-most new features of Android M that you all will love. Android M is considered to be Google’s most powerful release, with several platform improvements. It focuses on optimization with speed and battery life central to the experience. That being said, there are a lot of key differences between Android M and Android Lollipop. This made us compare the new version with the now older Android Lollipop build to show you what the new version does better than its predecessor!

In Android Lollipop, Google now was a dedicated Google feature, which tied together the information stored between Google apps together, providing useful contextual data whenever you needed. But in Android M, Google now is expanding to offer integration within third party apps and generate contextual responses from their data. Google calls this ‘Now on Tap’, which is always ready to assist users by just a long press of the home button. At the I/O keynote, a demo was shown of how the new feature understands context and displays relevant further information about the conversation taking place in apps like WhatsApp or Gmail.

With Android M, Google has created a uniform standard for fingerprint sensors across the whole platform. This is a big step, as until Android Lollipop, each manufacturer had its own solution integrated into the system. The new feature will allow the app developers to integrate fingerprint payment and lock systems into their programs, thus bringing authentication for individual apps.

With Project Volta of Android Lollipop, Google tried to improve the battery life. The attempt however failed, making Google introduce the Doze feature in Android M, which uses device’s motion sensors to detect if a Smartphone is being used or not. If it is not, the handset will be sent to a deeper sleep which consumes much less power. Doze will allow alarms and key notifications to come through. Compared to Android Lollipop, battery life has been doubled through this feature.

Google has brought a solution for secure mobile payment in Android M through Android Pay. An updated version of Android pay is being introduced, which will allow purchase with scanned fingerprint over NFC. Android will no more store your real payment data, such as credit card numbers but create a virtual number for each payment method, ensuring your data is protected.

Other than these, there have been minor improvements like Android M App drawer makes it easier to find your apps. Android Lollipop gives detailed information about the RAM each app uses. Android M has brought enhancements with two new fields that will inform the user on the average and maximum RAM usage of an app through RAM manager. There are been improvements in how text selection works and changes in the volume controls, which were altered in Android Lollipop. To provide users an enhanced web browsing experience, Android M has come out with a new feature called Chrome Custom Tabs allowing developers to insert webviews directly in their apps, giving them the full power of Chrome without having to force users to switch apps. In Android M, users will also be able to format their MicroSD Card to treat it as an internal memory. Users will even be able to install apps directly on the MicroSD card. Improvements have thus been incorporated in Android M to make it better than Android Lollipop. The new version has thus come out as a matured OS, helping resolve the issues that Android Lollipop faced! Semaphore Software is a well-known Android Application Development Company, specializing in developing innovative Android apps on the latest versions and gearing up for the Android M version! Contact us through info@semaphore-software.com to get in touch with our experienced Android app developers!