Microsoft Reveals Windows 10 to be the LAST Version of the OS! 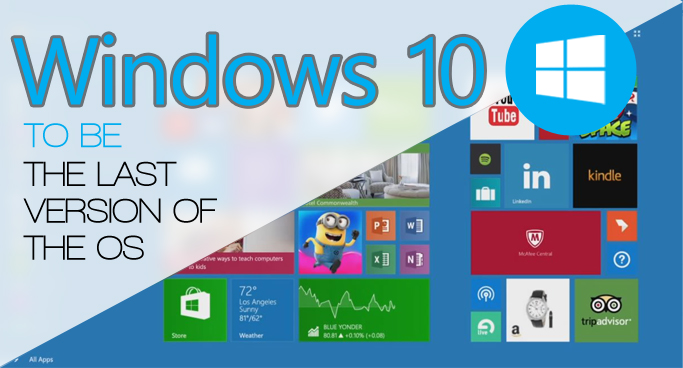 Windows 10 has been in news since it was announced last year and the latest to add is Microsoft’s decision to make the upcoming operating system, the last in its line! In the Ignite Conference held in Chicago, company developer Jerry Nixon, said: “Right now we’re releasing Windows 10, and because Windows 10 is the last version of Windows, we’re all still working on Windows 10.”

Windows 10 is set to be released at yet-to-be-announced date later this year. Instead of coming up with a new version as a discrete generation of the operating system, Windows 10 will be upgraded and updated on an ongoing basis. This reflects Microsoft’s new approach towards its products & services. Microsoft in the past has talked about the idea of offering “Windows as a service”. The tech giant doesn’t want the Windows OS market to be split between various versions.

Beginning with Windows 10, Microsoft aims to change the way the system is upgraded and updated. Instead of releasing major versions, the company now wants to have a modular OS. This will enable Microsoft to update parts of the Windows independently, instead of updating the entire core. The Windows market has been fragmented, compelling Microsoft to support older OS versions. End users were also affected as having old versions meant they didn’t get the latest features. The company will thus be pushing out regular updates to the OS instead of launching new versions.

Microsoft wants to make Windows a single OS for Smartphone’s, tablets, PCs and Internet of Things (IoT) devices. This will help the company to leverage its market share in PCs to grow its struggling Smartphone’s market share.

When Microsoft was asked about their plans of periodic micro updates, as in bringing in Windows 10.1 and so on, the spokesperson said, “We aren’t speaking to future branding at this time, but customers can be confident Windows 10 will remain up-to-date and power a variety of devices from PCs to phones to Surface Hub to HoloLens and Xbox. We look forward to a long future of Windows innovations.”

Microsoft’s upcoming OS has been designed to be used universally across all Windows platforms and will be launched in 190 countries and 111 languages. To provide a more personalized experience, Microsoft will release seven editions of Windows 10 to suit varied needs of consumers as well as businesses including – Home, Mobile, Pro, Enterprise, Education, Windows 10 IoT Core and Mobile Enterprise.

As per Microsoft’s Blog, Windows 10 will power a wide range of devices – everything from PCs, tablets, phones, Xbox One, Microsoft HoloLens and Surface Hub. It will also power Internet of Things, including elevators, ATMs, heart rate monitors and wearables.

It is worth mentioning that Windows 10 is due to arrive for PCs by this summer while OS for phones, tablets, HoloLens and the Xbox One will be released globally, later this year.

Contact us through info@semaphore-software.com to know more about our end-to-end Windows app development services!!