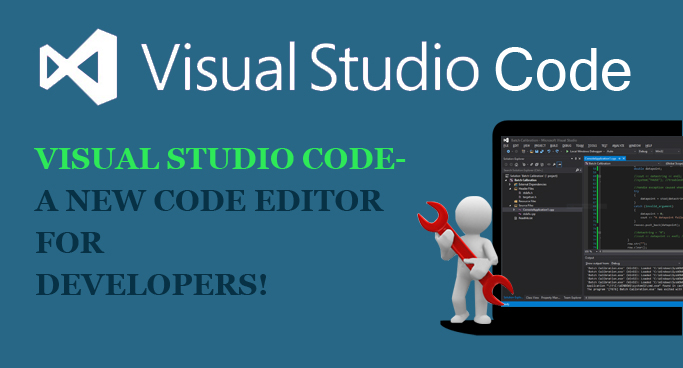 Microsoft unveiled its first ever cross-platform code editor Visual Studio Code (VSC) at the Build developer conference 2015 held at San Francisco, CA. Visual Studio Code is a fast, user-friendly and cross platform code editor enabling developers to build modern web and cloud applications on Windows, Linux, and Mac OSX. This new member of Visual Studio family of products is still in preview and will be helpful for more intelligent and efficient coding on various platforms.

This is for the first time that Microsoft has announced a developer productivity tool, allowing developers to use whatever OS they wish to and is a step towards software giant’s growing commitment to supporting other platforms. The developer from other platforms will be able to avail the benefits like IntelliSense, autocomplete and debugging in a much faster and lightweight editing tool. Visual Studio Code has Git integration and is a blend of simplicity and power of an elegant modern code editor, helping developers to work on modern web applications built in JavaScript, TypeScript, ASP.NET 5 and Node.js.

Visual Studio Code is free and will continue to be so, for any system, assisting developers in integrating with Microsoft’s existing cloud development solutions powered by Azure. It offers support for 30+ languages, syntax colorization, syntax highlighting, bracket matching, auto indent, customizable keyboard bindings and code snippets. Visual Studio Code also supports JavaScript, C#, C++, PHP, Java, HTML, R, CSS, SQL, Markdown, TypeScript, LESS, SASS, JSON, XML, Python as well as various other common file formats. VSC brings together the best of web, native and language-specific technologies. Microsoft has tried incorporating some of the Visual Studio’s language features to Visual Studio Code and has said that the language services built for this tool will be available in other editors like Sublime Text, Vi and Atom.

This powerful code editor is based on files and folders, allowing you to open a file or folder containing code or project files. It provides an intuitive UI comprising of Editor, Viewbar, Statusbar and Sidebar. Visual Studio Code supports Side by Side Editing, allowing you to open up to three editors simultaneously. It also helps in re-sizing, reordering and repositioning the editors if required.

Visual Studio Code is initially aimed to target the JavaScript developers looking for a full-fledged development tool for server-side scripting and wanting to go beyond Node.js to .NET-based frameworks.

The reception of the Visual Studio Code has been quite positive, with many developers already blogging on how to get the most out of this tool. VSC is definitely an amazing editor and by introducing a free tool running on all the major platforms in the market with many user-friendly features from the Visual Studio, Microsoft is in a run to become a full-fledged member of the community at large!

Visual Studio Code is currently under preview; if you want to try and test this new code editor, click here to download a copy.

Semaphore Software is a leading .NET development company, delivering high-quality customized .NET solutions across the globe. Our professional .NET developers have extensive experience in building robust and scalable applications using the most advanced tools and techniques including the Microsoft Visual Studio.

Get in touch with us through info@semaphore-software.com for any of your development needs!