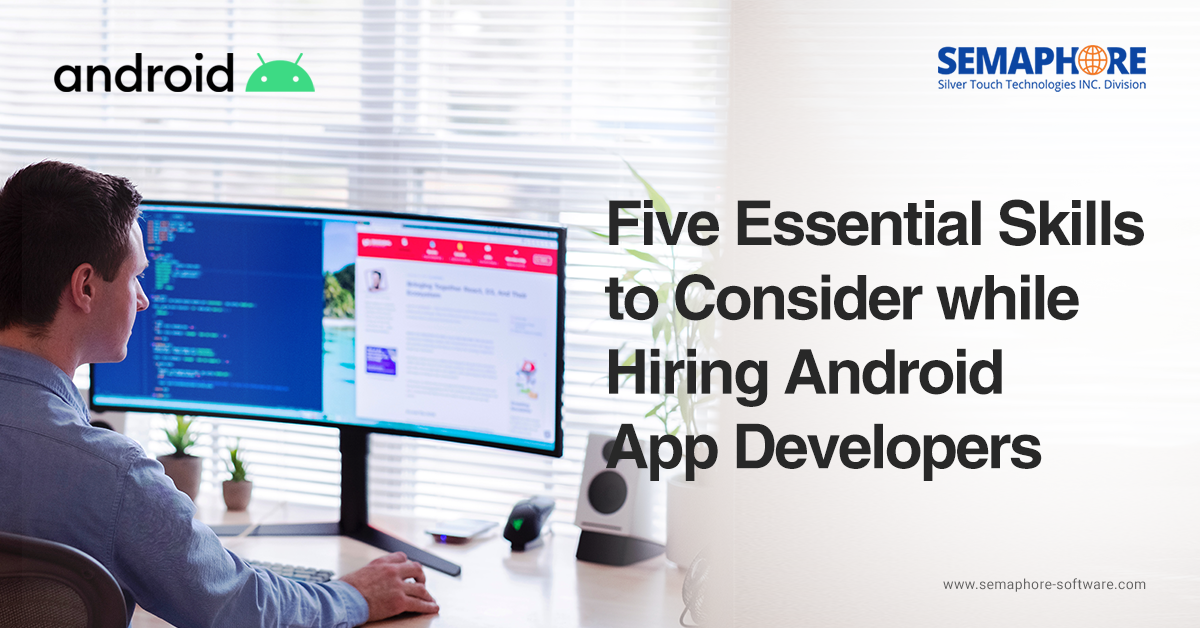 We are living in a mobile-centric world where the mobile phone has not only ceased to be a communication tool but also offers a wide range of features to make our daily life easier. Thanks to the increasing number of smartphone users across the world, the popularity of mobile app development is increasing. As a result, creating dedicated mobile applications has become very essential for every industry under the sun. It reflects a sudden and sharp rise in the demand for mobile app developers. But then, if you want to hire app developers for your project, you need to consider essential skill sets.

These days, native apps are made for two big platforms- Android and iOS. As Android OS enjoys the lion’s share with over 72% market share globally, it is beneficial for businesses to come up with a customized Android app. In this blog, we will briefly discuss some necessary skills you should keep in mind before hiring android app developers. In other words, if you want to hire app developers for building a customized Android app, then this blog will give you a clear idea of what qualities you should look for before hiring them.

Users mostly like visually stunning mobile apps rather than apps with poor graphics. But, it is fair to mention that the user interface (UI) is not just about graphics, it is much more than that. A perfect user interface is about having a simple and user-friendly interface, great design, and better use of colours and textures.

Also, during the development process, the design may change and a developer has to work on adjusting the UI to integrate desired features and functionality. Hiring designers every time for making some changes in the app can be very expensive. Thankfully, there are some great libraries and tutorials out there for Android to rely on, but the developer you hire must know enough about these libraries and tutorials.

What’s more, with the Material Design concept introduced by Google a few years back, Android developers can come up with robust apps that look more appealing, sophisticated, and faster.

2. Knowledge of deploying the app on Google Play Store:

Deploying an app on the Play Store is quite a task as many requirements need to be fulfilled before doing so. Though rules for publishing apps on Google Play Store are not as stringent as those for Apple App Store, developers need to know all the rules. Therefore, before hiring app developers, it is necessary to check whether they have done such deployment in the past or not. And if it is, then it will make things easy and quick for you. Also, while releasing an app, you need to sign a file that contains the hash key and shows that you are the owner of the app. This is an important file because you cannot do any updates without this file. An experienced app developer knows the importance of this file and will ensure that the file is saved in a safe place. He makes things easy and streamlined when it comes to security and backups.

Testing is done to uncover some critical issues like payment errors, security flaws, etc. before launching your app. Vigorous testing assists app developers to remove bugs, errors, crashes, and technical glitches just before the final development of the app in Google Play. Thus, all Android app developers need to have adequate testing skills and they must learn testing methods and tools to drive effective QA processes when tested in an isolated scenario.

An Android app developer needs to have in-depth knowledge of designing and programming to build user-friendly mobile applications. A good programming skill helps in breaking down new technology step by step for making the app ready for the future. Since mobile phones have smaller screens and simpler processors, Android app developers need to code flexibly for different user interface situations.

Java and Kotlin are the two major Android development languages that Android app developers can use for app development. They need to have a better understanding of both programming languages including syntax, frameworks, generics, and functional programming. You should ask your developers whether they are well-versed in Kotlin and make a feature-rich app in the latest version Android 11. Developers use XML to design layouts in Android which are linked to Java files, where business logic is written. What’s more, you can ask app developers whether they can make your existing business app compatible with Android 11.

App promotion skills are as essential as technical skills. No matter how good your Android app is, if you don’t have proper and effective marketing, you won’t be able to reach a target audience and get the necessary initial downloads. Thus, Android developers must have excellent publishing skills.

To publish an Android app for customers or internal employees, it must be published at the end of the app designing and development process. For Google Play submission, developers must be aware of programming guidelines along with the rules for submission and designing. They should also have sufficient successful practical experience.

Simply put, when you hire Android app developers, you need to ask whether they can optimize your app on Google Play before and after publishing.

Android apps can target a huge audience globally. All you need to hire Android app developers with the necessary skills mentioned here. You can consult a reputed Android app development company that has accomplished numerous app projects across various industry sectors. Once you select the right developers for your app project, you can leverage the benefits of a thriving mobile platform for your enterprise.

Semaphore Software is a renowned mobile app development company. We facilitate companies to hire Android developers to build enterprise-level apps in Android 11 or migrate their existing Android app into this latest version of Android OS.  We assist our esteemed clients to grow their businesses by integrating technological advancements in customized business apps.

Do you want to give your company an advantage of an advanced Android app? Simply send us an email at info@semaphore-software.com and we will get back to you with the most suitable app development roadmap.