Key Announcements Made During Google I/O 2016 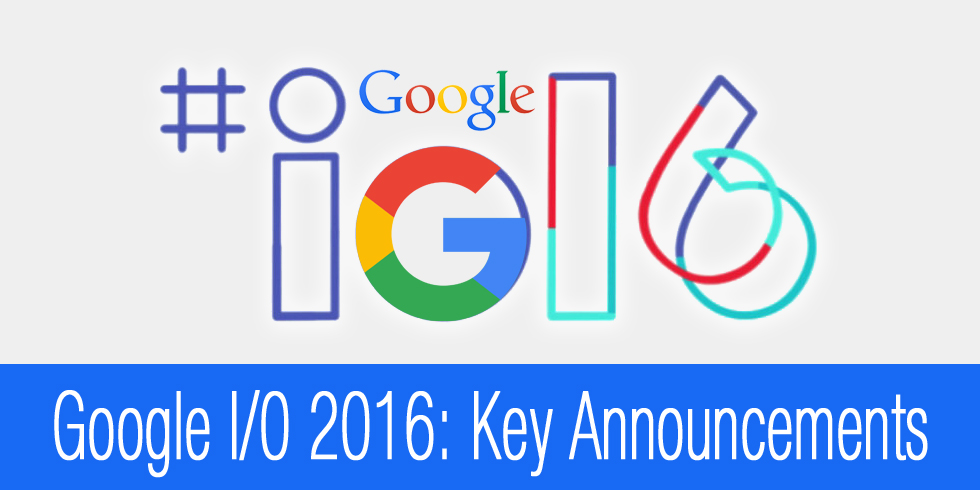 The Google I/O 2016 has finally been unveiled. It has taken the conversational & ever-present path towards communicating and adapting to technology. The new version of Android, which has been in the speculations for some time, has finally been launched with this event. The name for the new version is yet to be decided, though. Among the various announcements made during this event, some of the major ones include- two new messengers, the new VR platform, The event also saw the new rival to Facebook’s Facetime being launched known as Duo. Let’s talk about some of the key announcements made during the event, which will redefine technology as we know it.

Google announced the all new mobile virtual reality platform which it has named Daydream during this event. This new VR has been developed for Android N platform. As it is a mobile solution, Oculus Rift and HTC Vive are not its direct rivals. This is a huge advance in VR, which is currently in its nascent stages. This new VR will create an ecosystem which includes homescreen for apps, and is pretty similar to the Gear’s VR home screen. Some of Google’s apps have been recreated for the VR. This new VR platform will work with the newer phones that possess special sensors and screens. These phones that will function with VR will be available by this fall.

Google has launched two new messengers during this event- Allo and Duo. Allo is powered by AI and is the new Chatbot from Google. This new messenger comes with the regular messenger features like emoji, custom stickers and even the ability to draw some photos. You can even control the font sizes with this messenger. So, what’s new? Allo comes with Google Assistant; people can turn to the assistant for information as well as auto-generated replies. The privacy policy for Allo is said to be pretty strict. Duo, the other messenger, launched during the event directly competes with Facetime. This is a video chatting app and is completely leaned towards offering video-only experience. This easy to use app comes with the “knock knock” feature which will allow the person you are calling see you.

One of the most prominent features that you could see during the I/O event was the next-gen Google Assistant. Your “OK Google” has become chattier and loves striking a conversation with you. In fact, Sundar Pichai has begun the event by showing off this new feature. Want to know who built the monument you are currently viewing, ask “Ok Google.” The assistant gets your context and offers information real-time. With the strengths of national language processing and complete understanding of user context, the assistant can deliver information and answers quickly, without the user giving complete information. Users can benefit more with the voice queries. Google even keeps track of your earlier conversation. So, if you ask a question based on your previous question, Google understands and answers. Google has learned to respond to your emojis and conversations with perfection, advancing the level of your assistant. Along with enhanced features for “Ok Google”, a new home assistant known as Google Home was also launched at the event. This small speaker comes with “always-listening” microphones that will assist you. Google Home will directly compete with Amazon’s Echo. This new device is built on Chromecast standard, so basically media from the device can be pushed into other cast-compatible speakers and screens. You can even change temperature, light Nest devices or integrate Spotify with this smart device.

With each year’s event, Android seems to be getting better, smarter and more efficient. We saw the Beta version for Android N sometime in March; we saw features like split-screen multitasking, quick settings button and a whole new set of emojis. Google in the event launched a new Beta version of the OS with newer features which included more control on notification size, picture-in-picture mode. This new version promises to be a fantastic platform for gaming, as developers can directly control the phone’s GPU for better and sharper 3D graphics. This new OS is yet to be named. Android Wear 2.0 was also launched during the event. Minor changes have been made to this new version to offer a better experience. Users can pull data from any app and view it to the watch face. With this new version, your smartwatch will become autonomous. The new smartwatches equipped with version 2.0 will be less dependent on smartphones or the cellular connections. So, users no longer need to carry their phones around. Automatic exercise recognition and better 3rd party app sync will be seen with this new Android Wear version. During this event, Google has proclaimed a few improvements in the drivers. The traffic-tracking app Waze will be directly built into Android Auto, thus sending accident and over-speeding alerts to the drivers. So, basically, Android N will help ease the lives of carmakers. Google has come out with some smart and incredible features that will make technology engaging and conversational. The demos are pretty impressive. But, only time will tell whether Duo will take on Facetime or not and how well the new VR platform will work for Google. After having revamped the Android Wear, Google is looking forward to the feedback it will get from the users. We are as excited as Google for the launch of all these features. Semaphore Software with its experience in android apps development, offers solutions that help meet your business needs. Connect with us to know more about our services at info@semaphore-software.com.