Everything You Need to Know About Android 12 Features and Changes 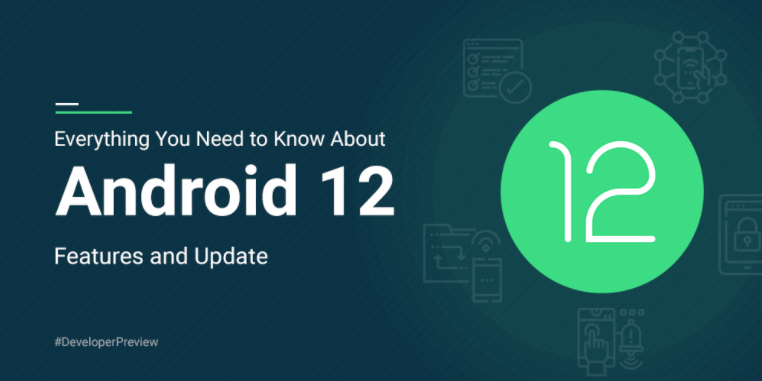 Technology enthusiasts got the first taste of Android 12 when Google released the preview of the first developer of the upcoming mobile OS (Operating System). As of now, the developer preview has been made available only for just a handful of devices. However, due to the build, there are quite a few confirmed features that will be a part of Android 12.

Many of you may wonder what might be the sweet treat name of Android 12. Please note that Google had stopped the culture of official names for the Android versions almost a couple of years ago after a sweet trevideo-container-blogat. However, it still uses treats in the form of internal code names. The best guess for 2021, with assistance from XDA developers, is that the code name might be snow cone. It might follow up with the internal codename for Android 11 that happened to be red velvet cake, and the internal code name for Android 10 happened to be quince tart.

Those concerned with developing Android apps have become sick and tired of apps that occupy storage but do not necessarily want to remove them. Hence, app hibernation could be pivotal in how Android manages the footprint of the apps. This feature is already there in the AOSP (Android Open Source Project). It will effectively allow the operating system to clear up an app’s cache if labelled as hibernating.

However, as of now, it is unclear what exactly determined a hibernating app. It is still unknown whether the user or the operating system determines the status. Also, it is unknown if the feature will include storage management tricks or not like deleting the system cache or compressing unused apps. Those who need a lot of storage may not feel it. Still, it would be a massive addition for old handsets or entry-level Android devices waiting for their turn to upgrade.

Two Apps As a Single Task

Google has not said goodbye to fervent multi-taskers in Android 12. Evidence points to the fact that the company is trying out a feature known as App pairs. This feature would allow operating two active applications as a single task on the recent menu. The name is similar to the App Pair feature of Samsung on One UI that allows opening two apps on-screen using the Edge panel. The surface duo of Microsoft has a similar feature that allows operating a pair of apps directly from a shortcut. It is still not clear whether the native solution of Android would be inclusive of these features or not. Nevertheless, the feature is going to be a boon for large handsets, tablets, and foldable. This feature can help simplify the ability to toggle between full screen and split screen apps.

A revised networking management mode might be associated with Android 12. It would allow more control by the operating system to allow apps to have access to the Internet. As per XDA, the feature will resemble a block list that a setting would activate through a toggle in the operating system. In all probability, this toggle can be accessed by the user. However, it is unclear whether the actual block list will be user defined or not. Going by the commits that have been merged to AOSP, the feature will allow certain apps to have the CONNECTIVITY USE RESTRICTED NETWORK to utilize the network. The rest of the apps will be barred from communicating with the outside world.

In Android 11, there is a provision for a single time location permission according to per app basis. It will indeed be a valuable addition if a restricted networking mode is added since it would enhance the security provisions. Users are expecting a rather granular implementation in case it arrives on time for Android 12.

Scrolling screenshots are still a bit janky/broken, but it actually works! (It's not enabled by default so you won't see it when you update.) pic.twitter.com/7ih2zQgvZk

It has been in the pipeline even before the arrival of Android 10. Android 11 was a disappointment since the feature of scrolling screenshot support was omitted. Many wonder whether it is the baked-in feature of Android 12. As of now, it seems that it might be a reality. As per XDA, Android 12 is having this particular code. The only thing is, the feature has not been activated. In Android, it is possible to take scrolling screenshots through third party applications. However, default support would be a welcome bonus.

When the Developer Preview of Android 11 was released, it was packed with nifty double tap functions. These could be enabled at the end of the user with some work. It allowed pixel phone users to launch apps or control hardware with just a couple of taps at the phone’s back. While it is not an essential method of control, it happens to be a helpful way to avail important features without making any contact with the screen. Unfortunately, this feature never made its way to the stable build of Android 11. The chances are high that this feature might be made available on Android 12.

A feature codenamed Columbus allows users to snag screenshots, launch the Google Assistant app, or open the notification shade. Additionally, Google may allow users to adjust the sensitivity of double tap or perhaps disable it entirely if the features are not up to the mark.

While it has been confirmed that the wallpaper based theming support has been integrated into the operating system of Android 12, it has not been confirmed yet whether the other UI modifications will make the cut or not. None of the elements was available in the first Android 12 developer preview. However, these may be there in the OS at a later stage. Presently, there is hardly any difference between Android 11 and 12.

According to Android developers, Google is ready to develop a new trans-coding layer in Android 12. It will allow transcoding in AVC by the apps that do not support HEVC video compression. The process is expected to take time based upon the processing power of the chipset.

Android 12 is a revolutionary operating system version that aims at extending its innovative set of features for the end users. Therefore, it becomes imperative for the users to know about such features and changes to maximize the overall experience.