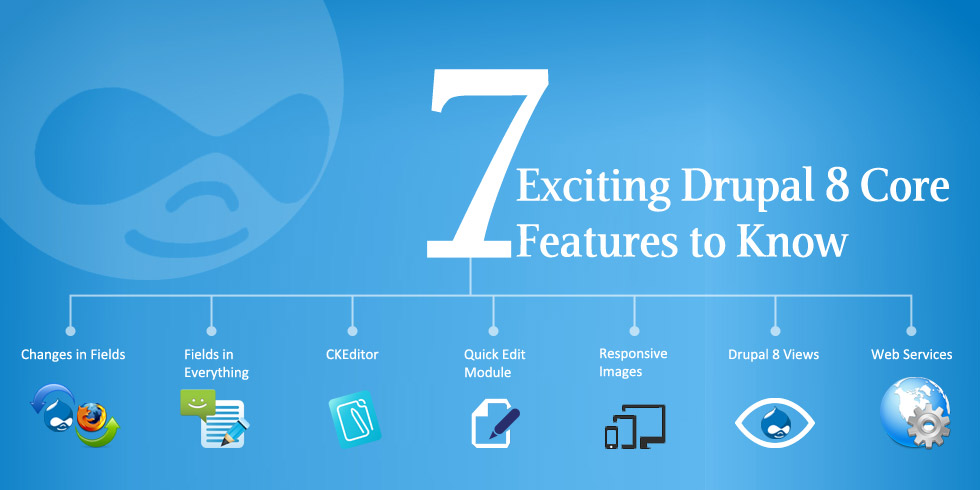 For all those familiar with Drupal development, Drupal 8 is going to be a step ahead in terms of personalization, and aesthetics. There are some modules that have offered excitement in Drupal’s earlier versions, but Drupal 8 is a completely revamped platform. A lot of new improvements have been introduced in this version. For now, we will look at some of the features that will be seen in Drupal for the first time ever, and which will make your development interesting and exciting.

Some new fields have been introduced to the Drupal core. Earlier, these fields needed to be added, and were part of the customization. Now, these fields can be chosen from the core. Date, Email, Link, Reference and Telephone are the new fields that have been included in the core. The form field names are more direct in Drupal 8. The other minor change in the fields is comments. Earlier, comments’ was part of the settings, but not it has been included in the core as a field.

Earlier versions saw restrictions on usage of fields. Now, the fields are spread across the core. You can add fields to the nodes, blocks, comments, forms, users etc. Of course, there is a clause on the field type that can be used in the particular portion. Long formatted text is used in basic blocks and default comments. There are different uses and usage patterns observed for the fields.

The concept of WYSIWYG is gaining popularity in the present times. This has led to the inclusion of CKEditor in the Drupal 8 core. This is definitely one of the best editors.

You no longer need to enter the admin interface to edit something that you don’t like, or find unappealing at the front end. If you are logged in, you can edit from the front end itself using the quick edit module which is a part of the Drupal 8 core. This is definitely going to increase fun!

The Drupal 8 core has instilled the responsive ability. Earlier, in Drupal 7 you had image styles within the core which allowed resizing of the images according to the device size and resolution. Drupal 8 has taken responsive abilities seriously and has gone a step further. It allows you to choose individual styles for the individual images. The style will depend on the size and type of device you are planning for the web application.

Views is now a part of the Drupal 8 core. With the views as part of the admin screens, customization is easy. This is why Drupal 8 is considered effective and efficient from developer’s perspective.

Multi-lingual abilities have been introduced to the core. If you wanted to create web service in Drupal 7, you needed contributed modules. This is no longer the case for Drupal 8. The web services module is part of the core along with multilingual capabilities and views. So, your core is ready for personalization and customization. Semaphore Software has a highly capable Drupal team which is equipped with necessary knowledge and capabilities for Drupal 8. To know more about our Drupal Development Service, get in touch with us at info@semaphore-software.com