A Glimpse into Different Stages of Android Development 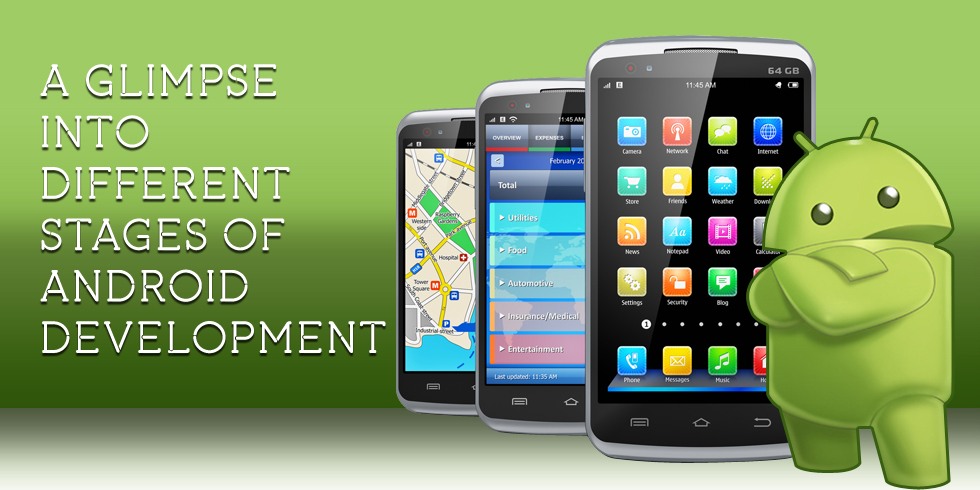 Android is dominating the OS market, with most devices running on this operating system. Is it an easy to comprehend platform? Till about a few years ago, this platform was considered to be complex, and difficult to work on. Even a simple application development could give the developers nightmares.

Problems Developers Faced: The Past

Let’s take a quick note of the problems that existed on this platform till sometime back. If you want to understand the future, you need to delve into the past.

Originally Android used to include an official IDE, Eclipse, using which you could perform Android development. But, the IDE was not devoid of any problems, and was extremely slow and filled with bugs. It was quite an unfriendly way into development.

Gingerbread, the earlier Android OS version, possessed a huge market share. The Ice Cream Sandwich Version 4.0, was a complete makeover of the existing Android platform. With new APIs, hardware and screen densities, the apps were meant to work well on both the new as well as the previous versions. This meant work for the developer, who had to put up with more bugs, and more platform issues. This prolonged the development time.

If you wanted to test your Android app earlier, you needed to purchase the different devices that possessed different versions and were contained in different sizes. The emulators for Android were dull, depressing, and pretty slow. This is why people in the past never relied on emulators.

Break from Monotony: The Present

Sometime last year, Android decided to break the monotony and rigid features, which made it incomprehensible. A complete makeover resulted in a refurbished Android ecosystem. With newer and better hardware, software and a stable OS, Android utilized the true potentials of a open source system. A whole load of changes were incorporated into the new OS. Here’s a list of what all changed

With Android Studio, you have a more stable IDE for Android development. This is the V1.0 for the IDE, and it has officially made the Eclipse ADT plugin a thing of the past. With this stable system, it is advised that you officially migrate apps to AS from Eclipse

This project automation tool has replaced the Apache Ant, and it is the primary build system for Android applications. With this tool, Android developers can automate The test automation libraries as well as automation build servers are a result of gradle, because of which a continuous integration development process has come to Android OS. But, obviously not everything is perfect with Gradle. It can be very slow in case of complex projects.

It is the material design that offers a similar but not an identical looks for different apps created on Android. The user experience principles ensures you consider everything when designing your app. Even the minutest detail should not be ignored in an app design. There should be a response to the different user interactions like click, touch etc. The runtime system developed for Lollipop ART does incredible things to your application. It has replaced Dalvik primarily, and offers some excellent features. One of the many features includes AOT (Ahead of Time) compilation. With this feature, the intermediate language is compiled into a system dependent binary which literally translates into shorter execution time, and less usage of the CPU. Another feature includes multidex support. There were only 65,356 methods in the Dalvik dex files which could pose as a restriction. ART organizes the application using break byte-code in multiple dex files, which are then packed into a single APK. With Android being the operating system for every other smart device, and smart devices being cultured specifically for Android, it seems that Android is totally omnipresent.

The Future of Android

Thinking Out of the Box:

The database management API is another concern area for Android. iOS offers some incredible methods combined with GUI to create database objects. The default Android API still works using the SQL commands. It is not easy to debug SQL errors, and ends up being a cumbersome process. It’s time Android concentrates on something that would indulge database management consuming less time. The three stages i.e. the past, the present, and the future, for Android have been interesting. The present has definitely improved over the past, but there is scope for improve. Java as the default language proves to be a hurdle, which can be subtly removed. At the same time, some improvement in database management can improve the overall speed of development and testing. Semaphore Software a leading Android app development company has relatively good experience and expertise in creating apps that suit your needs. To get in touch with us, you can contact via info@semaphore-software.com .