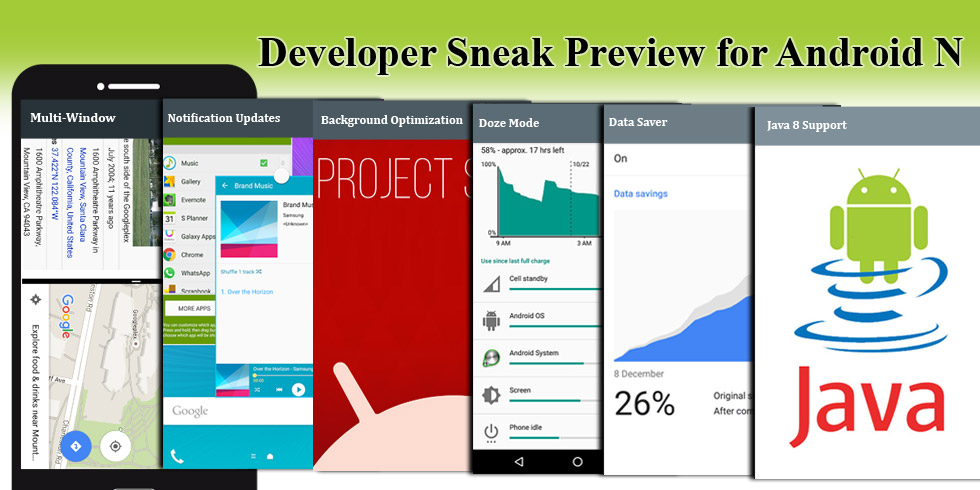 Since Android M, Google has been working on offering an efficient multi-tasking system to Android OS. It was available with the M developer preview, but was not a part of the final working release of the M release. Google seems to be ready for this leap with Android N, which will come with the multi-window feature which will work on both tablets and phones. The developers can opt for split screen mode to make sure their apps run smoothly. For this purpose, a new manifest attribute android:resizableActivity is being introduced. If you have set this attribute to true, then you will find the activity launched in the split-screen mode on your phone as well as the tablets. The minimum allowable dimension for the activity window can be specified. The activity lifecycle is not changed with the multi-window mode. When you change to the multi-window mode, you will be notified by the system on the configuration changes as specified in the Handling Runtime Changes. You can view the activities in the picture-in-picture mode using the android:supportsPictureinPicture attribute. You can always stop the activity and recreate it using new dimensions with this attribute.

Efforts are on to minimize the usage of RAM by the apps as well as the system on the different Android devices. This effort is known as Project Svelte in Android. In Android N, this project is focused on optimizing the apps running along the background. When the background processing is handled effectively, it can enhance the user experience for your apps. JobScheduler with Android 5.0 and GCMNetworkManager which is a part of Google Services, extend their services towards optimizing the background apps. In Android N three types of broadcasters will be removed i.e. Connectivity_Action, Action_New_Picture and Action_New_Video. The reason being, these broadcasters can initiate these apps in the background and reduce the battery life. You will need to use JobScheduler and remove these broadcasters for better background processing.

The cost of your data plan eventually exceeds the cost of your smartphone, which is something every one of you has experienced in your lifetime. You want to conserve your cellular data, so that you don’t spend it carelessly. This is the reason why the data saver feature has been introduced with Android N. The Data Saver mode will reduce the data usage by giving you more control on this aspect, and help developers offer efficient service when the Data Saver is on. With the ConnectivityManager, N release will be able to understand the user’s Data Saver preferences, and also monitor the changes in the preferences, so that they can offer services accordingly.

The doze mode has been enhanced for the N release of Android. This feature, in the past releases, worked when the phone was left unattended for long hours, specifically when you were sleeping. But, this feature will work each time you switch off the screen. This means your battery is saved each time your screen is turned off, thus impacting the energy consumption majorly.

The Java 8 features have finally arrived with Android. The Android Jack Compiler will allow you to use the popular features like lambdas etc. thus reducing the boilerplate code, and making your system efficient. The Java 8 features like default, functional interfaces, streams etc. are available with N release. Getting Started with Android N The N release for Android comes with an updated SDK which includes system images specifically for testing purposes. This initial preview release is meant for the developers, and is not for commercial purposes. If you are a developer wanting to test the preview version, you can download images of this new OS from Google directly. The update can be downloaded from this https://developers.google.com/android/images/ link Currently the preview version is only for Nexus devices. The developer preview version does not have a name as yet. Many people are suggesting the N may stand for Nutella, but we will have to wait for Google I/O 2016 to know the name finalized for Android N. Semaphore Software a top-notch Android development company, stays abreast with the latest trends, developments and upgrades in Android. We have a dedicated team of experts, who with the years of experience offer best-in-class Android apps suited to your business needs. Get in touch with us at info@semaphore-software.com to know our Android services in detail.