ASP.Net MVC 6 the All New Features 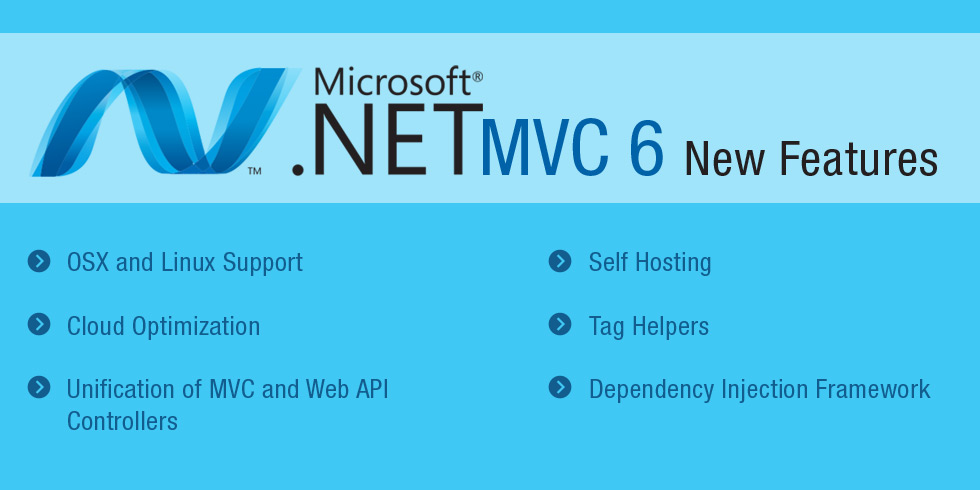 MVC 6 which is a part of ASP.NET 5 framework has come as a huge shot in the arm for developers. Developers and companies working with ASP.Net framework are excited about the features that this new release will bring in. According to ASP.Net Development Company, new concepts have been introduced with the new version, and they have been built from the scratch to offer more scalability. Here, we will discuss some of the new features that ASP.Net MVC 6 will bring in for the developers.

OSX and Linux users can now rejoice as ASP.Net applications can be run on both OSX and Linux platforms for the very first time. This is surely a great move for designers and developers, who are pro with these operating systems for app development. Thus, developers who don’t fancy using Visual Studio would be able to use other development environments such as Sublime Text and WebStormto create apps.

There is a growing clout of cloud based applications and MVC 6 has addressed the needs of the developers. With the new update, cloud optimized apps can be easily built within the framework. To facilitate cloud based development, the MVC 6 runtime automatically selects correct version of the library, whenever your apps are deployed on the cloud.

In MVC5, you could have experimented with self-hosting but, for this you first need to host the application on IIS and, then run it on top of ASP .NET Pipeline. MVC 6 on the other hand can be easily self-hosted as it makes use of flexible pipeline where you get total control over all the components which are a part of the pipeline.

If you have relied on MVC helpers for manipulation of server side HTML elements in Razor view in the previous version MVC 5, then you would immediately become a fan of the newly introduced Tag Helpers. Many developers are seeing it as one of the biggest offerings of the new version and it is expected to speed up development and will help offer the latest content to the users.

The new version comes with in-built support for Dependency Injection and also for the Service Locator pattern. What this means is that you are no longer forced to seek support from third-party Dependency Injection frameworks such as AutoFacor and Ninject. This further makes it an all-inclusive development environment that Microsoft wants to market it as.

For over more than a decade ASP .NET has created a strong foothold when it comes to web application development, specifically when it comes to developing dynamic websites. If you are looking for a seasoned team offering ASP .Net development company, then your search ends with Semaphore Software. We develop the dynamic and highly scalable apps for you. To discuss your project and to hire our services, drop us an email at info@semaphore-software.com.