Android M, iOS 9 or Windows Phone 10 – The Winner Takes Most 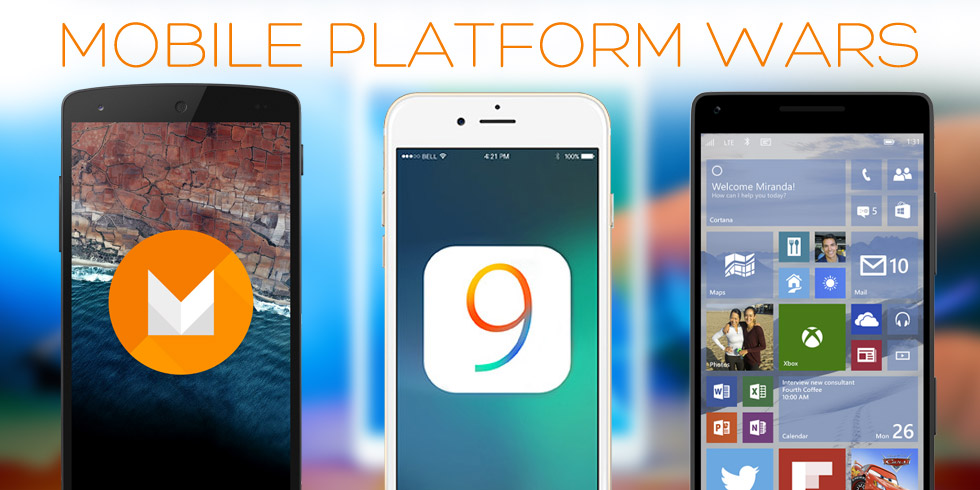 With the rapid growth of mobile technology, the top three mobile OS development companies i,e Apple, Google & Microsoft are fighting hard for the top spot. Recently, all three companies released newer versions of their OS-iOS 9, Android Marshmallow & Windows Phone 10, which are said to offer better features and functionality. Let’s compare the three OS to find out how they differ from each other:

Android M reproduces the Material Design look of Android Lollipop with a few tweaks. It provides a quick access bar for those apps that you use the most. This will make it easier to get to your favorite apps with a few taps. It provides Customizable Quick Settings by simple drags and drops with the help of the new System UI Tuner tool, a rotating home screen, visual voicemail, new RAM manager and simplified storage and battery sections. iOS has replaced the Helvetica into ‘San Francisco’ font in iOS 9. It has improved the design for the podcast app section. The new OS allows users to switch from one app to another with a layering view with ease. It has added search option in settings for quick search and lower case in the keyboard. iOS 9 has improved transit section in Map. Windows Phone 10 brings UI updates in camera & photos improvement, transparent PIN, app tiles, quick settings options etc. Other adjustments include changes in fonts, icons, and layouts.

The Voice Assistants- Google Now vs Siri vs Cortana

Google Now, Apple’s Siri, and Microsoft’s Cortana continue to elbow each other, as the three digital assistants compete to be the most prescient and helpful of them all. Users can enjoy extremely cool features with Android M thanks to Google Now. Users can launch Google Now with ease- you either keep the home button pressed for a while, or swipe along the lower left-hand corner of your device. With this feature, Google Now will understand the context of your question based on the app you’re in. iOS 9 has also introduced updated version of Siri with more new functionality. Now, users can search for photos and videos stored on the device by date, location, and album title. Siri can also take into account what you’re doing on your iPhone at any given moment to create contextual reminders. Siri will provide proactive assistance to the users. If you get a call from an unknown number, Siri can use the information available on your phone and in the e-mails to suggest who that person could be. The list of features is endless with Siri. Microsoft has improved Cortana in many areas specifically in alerts, tracking, pertinent info, dark interface etc. Cortana will provide daily info such as: email notifications; Cortana will even remind you of your special events & meetings. If you want to search & get updates about weather, the stock market, sports, games etc. Cortana will track reports & update you accordingly.

The most important change in Android M is the revised app permissions’ system. While installing the app, users are asked for specific permissions by the app, to access all the related information. Once you press ‘ok’ you grant access to these apps, and there is no way you can go back and change that permission setting unless you re-install the OS. However, Android M brings an option in the Settings Menu that will let you control and change the information that can be used by individual apps. With app permissions, you can enable/disable the access to information like contact, location, media, camera and identity. Despite Apple tracking your phone usage, and sending algorithms through your emails to optimize some of Siri’s new features, Apple gleefully emphasized that all the data it gathers is stored ‘on-device’ and remains strictly private and for your own benefit. iOS 9 has a new interface for iCloud two-factor authentication. Windows Phone 10 has not included any updates for Privacy improvement. So, as of now the privacy options remain similar to what was present in Windows 8 and Windows 8.1

Google has solved one of the biggest smartphone issues which happens to be battery usage. Android M is focused on improving battery life by snoozing off intelligently. If you want certain apps to keep running in the background, when you’re not using your phone, you’ll be able to enable them by disabling the new Doze mode on a per-app basis. It saves 2 times more battery than Android L on standby mode. Apple has also worked on improving battery life, in iOS9. By setting the device on ‘low power’ mode in iOS 9, you would potentially boost the battery life by an extra three hours. Apple claims that the standard battery life would improve by an hour in iOS9. Windows Phone 10 introduced dark theme for Cortana to conserve battery life. It provides a ‘Battery saver mode’. With this feature, users can turn off all the non-essential features and conserve battery in just a few taps. You can even limit background usage to save power – you can see how much battery power your apps are consuming and change the apps that run in the background.

Android M facilitates mobile payment through Android Pay, which lets users pay with their fingerprint over NFC. It creates a specific virtual account number for each user so that the card details are not revealed to the retailers. It has partnered with many commercial outlets like McDonalds, Subway and others to bring Android Pay to the market. Apple Pay was introduced with iOS 8, and it allows users to save the cards on the devices you use every day. You can stay assured as your card details are never shared with retailers or anyone. To pay, you just need to hold your iPhone near the contactless reader with your finger on Touch ID. You can even double-click the Home button, when your iPhone is locked so that you can access the Wallet and complete your transaction. Windows Phone 10 supports NFC payments similar to Apple Pay using windows Wallet. Wallet is backed with rewards/loyalty cards, tickets, and boarding passes. Users can host multiple cards for quick payment like Apple pay & Android pay. Though, all the three mobile operating system’s new versions have included new features and functionality, OS updates will largely depend on user feedbacks. As of now, it is difficult to say which of the three will top the charts. But, the battle for the top spot seems to be getting difficult for all three. To get your apps developed for Android Marshmallow, iOS 9 and Windows Phone 10 get in touch with Semaphore Software the premiere Mobile Application development company at info@semaphore-software.com.