Android N vs. iOS9 A Comparison 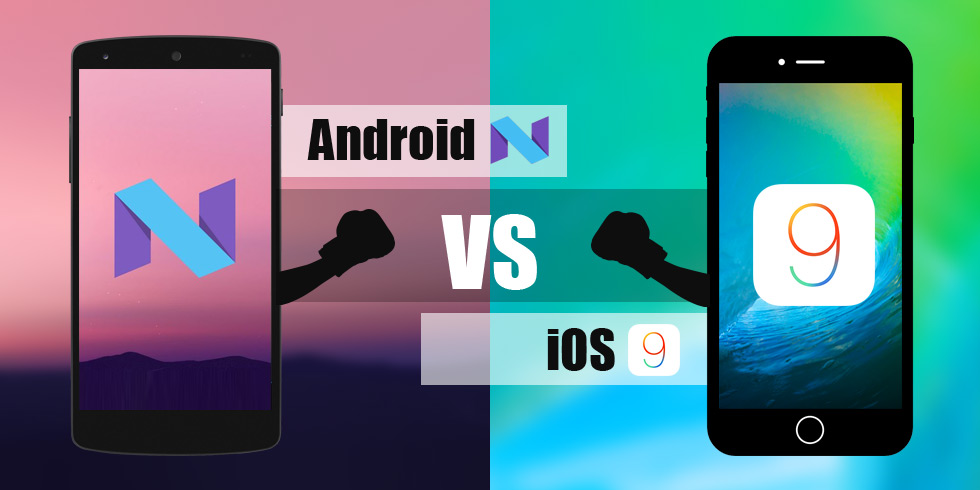 Android vs iOS is gaining momentum once again with the release of the developer preview of Android N. Comparisons are on between Android N and iOS 9. While, some believe certain features for Android has been inspired by iOS 9, some believe that Android N has come out with some interesting features unique to this platform. Here we have jotted a few points of comparison for the version releases of both these platforms.

If developer preview is anything to go by, Android N users can expect a completely new interface. The notification tray is one of the biggest improvements made with this new version. With this update, users can directly reply to the messages from the notifications tray itself. The new multi-window mode is yet another enhancement made with the interface for Android N. This feature has been inspired by Apple’s feature split-view for iOS9. Despite having introduced minor enhancements to the iOS9 interface, Apple stands ahead of Android in its interface. The interface enhancements for iOS were last made in the version 7.0. No major enhancements were made with iOS9. The night mode is a feature that was introduced with iOS 9.3 version, which gives it an edge. The night shift automatically changes the color balance to minimize brightness during the night. Picture in Picture is another feature inspired by iOS9, where the users can view images and videos in one corner of the screen.

With smartphones getting smarter, the race for the perfect intelligent assistant tool is gaining momentum. As per the developer preview, Android N will only made cosmetic changes to Google Now. The Google Now on Tap takes you to the next generation of personal assistants that can understand the question and respond better. Apple’s Siri on the other hand struggles with achieving the experience level offered by Google Now. Siri received the recommendation feature in iOS9 which helps it suggest activities and answers based on the features and apps the user uses on their phone.

Security has never been Android’s forte as its open environment has often given headache to the users. And as far as developer’s preview is concerned there doesn’t seem to be much improvement over Marshmallow. In the last update, Android had introduced eight core permissions for apps including access to microphone, contacts, medical data etc. customizable at the user-end. In iOS9 Apple has brought in two-factor authentication and MAC address randomization to improve security which widens the gap between the two operating systems in terms of security.

Everyone from Android app development companies to users with entry-level Android phones have always wished for better battery life. For Google, this can called the Achilles heel. But, things are likely to change with Android N. Android N brings out new power saving mode that will improve its Doze mode, which was introduced in Marshmallow. This feature has been inspired by Apple’s Doze & Low Power, which it had introduced with iOS9. However Android’s motion sensors ensure that your phone goes off to doze mode when there is no activity, while Apple’s feature needs to be activated by the user.

iOS9 delivers a killer blow to Android when it comes to compatibility with old devices. While some would say it is easy for Apple given limited fragmentation in the market, nonetheless iOS9 supports devices going all the way back to iPhone 4S which was shipped with iOS5. Since Android has little control over the manufacturers, most existing users are likely to miss out on this new version of the operating system without switching to a new phone.

For Android it has been a story of struggle in this territory and it hasn’t been able to match the ease and acceptance of Apple Pay which many banks around the world suggest to their users. While some improvements have been made in Android Pay, it has a long way to go before taking Apple Pay head on. Even the developer’s preview that Android has launched doesn’t offer access to all its features and functionalities as it awaits clearance from Google’s ‘Compatibility Test Suite’ It’s difficult to pick a clear winner given the fact that we haven’t yet seen the full release of Android N and both have their own pluses and minuses. More often than not Android and Apple supporters come from two different ecosystems where there is common meeting ground. However the competition between the two would get intense when the full version of Android N is launched. If you are looking for inspiring apps that allows you to engage with your potential clients and monetize the relationship, we are here to offer you the edge. At Semaphore Software we have been involved in Android and iPhone app development since their infancy and have developed apps for clients across industries. Drop us an email at info@semaphore-software.com and we shall make this engagement fruitful for your business.