Android from Gingerbread to Marshmallow – A Comparative Analysis 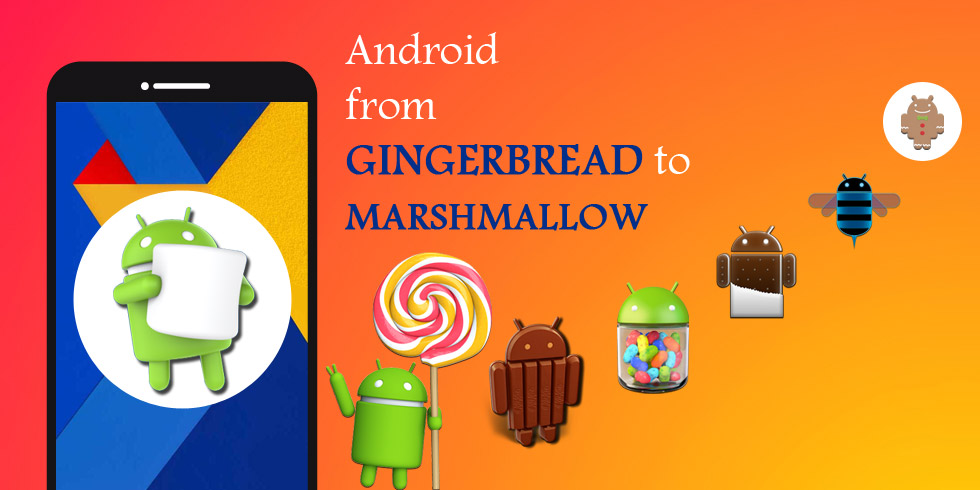 The contemporary narrative of mobile operating systems and Android is so synonymous that it is hard to believe that the founders Andy Rubin, Rich Miner, Nick Sears and Chris White (in the pre-Google days) were working on building Android as a Camera Operating System. Android has come a long way, with the latest 6.0 Marshmallow promising to live up to the expectations of the users. Businesses around the world see Android app development as one of the ways of staying relevant in this digital world. Here in this short write-up, we will go through the complete journey of this operating system, and perform a comparative study of Android from Gingerbread to Marshmallow.

It is with this version that Android started its journey towards becoming the most sought after mobile operating system! Of course, growing popularity of smartphones also helped. The new User Interface was crisp and gave stiff competition to iOS 4. This version is also credited to having led to the proliferation of selfies as a single tap could interchange between the back and the front camera. It also introduced Near-Field Communications (NFC).

This was a tablet-only version of the OS and was released (or rather rushed as Google later admitted) to compete with the launch of Apple’s iPad. While the initial release earned more criticism than accolades the later improvements in the design were appreciated. One key improvement was a fixed status bar at the bottom of the screen allowing manufacturers to develop devices with no buttons other than those for power and volume.

It has been dubbed as the Honeycomb for mobile phones, but brought in a host of new features that included face unlocking, Android Beam and data usage tracking. It was also the first ever Android OS that allowed mobile users to sync bookmarks and saved paged with the desktop browser. Here, carriers and manufacturers hoodwinked Google and prevented it from selling its own devices directly. Android Market turned into Google Play Store.

Once said to be Google’s biggest Android release, Jelly Bean took Android OS to the masses. Affordable smartphones were launched around the world and Google Play Services that were introduced in this version became an instant hit. Apps and core components could be updated without having to overhaul the entire OS.This also allowed Google to come up with smaller incremental updates that continues to this day. The expanded notifications were introduced in this version so was the predictive search functions with the launch of Google Now.

With cheap handsets being developed around the world with lower specs than flagship phones Google turned its attention to minimal memory usage. It is perhaps the most distinguishable thing about KitKat. It also marked the beginning of Android Wear.

Lollipop brought in a lot of design tweaks and the most notable has been the immersive mode that does away with status bars and navigation bars allowing apps to take advantage of the full screen. Brighter and more colorsled experts to dub it as the sweetest release by Android users.

Marshmallow is the future that Android is expected to unleash. Still in its developer’s preview state, this version of the OS promises a lot with improved security features that allow users to control the permissions that the apps ask for. It would also include support for USB Type-C. It will also introduce a quick fingerprint access to the Google Play Store. To get your apps developed for Android Marshmallow get in touch with Semaphore Software the premiere Android development company at info@semaphore-software.com.