Android 5.0 Lollipop – Is it the Sweetest Android Release till Date? 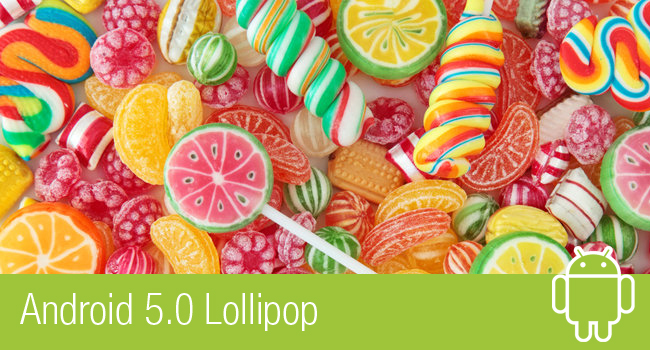 Every year Google comes out with a new version of its Android mobile OS. However, the hype and anticipation created for its latest Android 5.0 Lollipop hasn’t been seen in earlier versions. It is also considered as the biggest update since its 4.0 Ice Cream Sandwich release. So what is so special about this version? Is it worth all the hype? To answer these questions, let’s have a quick bird’s eye view of Android 5.0 Lollipop’s foremost features.

Lollipop’s new UI is colorful and sleek, has performance upgrades and gives cross platform support. There have been enhancements in security and battery life too. Not only these, Lollipop has many more juicy and mouthwatering features to offer!! Let’s delve deeper into them!!

Through Android 5.0 you can get a better battery control. The ART feature turns off the background data when your device is flagging. You can switch it on manually or set an automatic system with a certain battery level. You will also be able to see the time left for battery to charge fully and time left for battery to drain off. It has been asserted that the battery of your Android device will be extended by 90 minutes of user time.

Android 5.0 Lollipop has Smart Lock feature allowing you to automatically unlock your smart phone using Bluetooth, NFC etc. It has also provided additional security with Encryption feature, which will be turned on in your device by default helping you protect your data. The Security Enhanced Linux (SELinux) in Android 5.0 is enforced for all apps, making monitoring easier and protecting from vulnerabilities and malware. Android 5.0 has also introduced knox security helping you use one device both for work and personal use.

Android 5.0 has introduced features for creating multiple users for your phone allowing you to share your device without any fear of disclosing your personal information. You can set multiple profiles having different contacts, apps, settings etc. helping you control the access of content. The guest user mode will be helpful when you forgot your phone at home allowing other users to view synced messages and other information.

A quick settings menu helping you control flashlight, screen rotation, screen casting, hotspot, swapping between WiFi and much more, has been introduced in Android 5.0 Lollipop. Your phone will now be able to adapt to various light conditions through Adaptive brightness.

There has been an improvement in the application performance in the new Android Lollipop due to replacement in Android’s app engine. The Dalvik runtime has now been replaced by Android Runtime (ART). ART support 64 bit devices enabling faster app launching and improvement in performance by almost 4x times.

Audio, Video and Camera capabilities in Android Lollipop have improvised. It supports bolder graphics. It has lower latency audio input, stream mixing and USB Audio support for amplifiers and mixers to provide a real-time experience. The new camera also supports full resolution frames at 30fps along with supporting raw images. You can even control capture settings for your camera’s sensor, lens and flash.

You can get easy access to information by just saying “Ok Google” even when your device’s screen is off. You can even talk to Google and get quick answers, send texts, activate apps, get direction and much more!!

There have been additions of fifteen new languages to Android 5.0 Lollipop giving a regional appeal to the Android devices.

Android 5.0 Lollipop can be considered as the sweetest Android release till date as it flaunts some exciting and fresh features. Users are really going to enjoy some juicy moments having it in their smart phones!!

Want to experience the sweetness of Android Lollipop?? Get in touch with Semaphore Software, having expertise in Android App Development. We are updated with the new technology and have skills to extend the benefits of the latest Android 5.0 Lollipop to our clients!!