Amazon in a Run to Beat Facebook and Google – Introduces a New Ad Platform for Mobile App Developers! 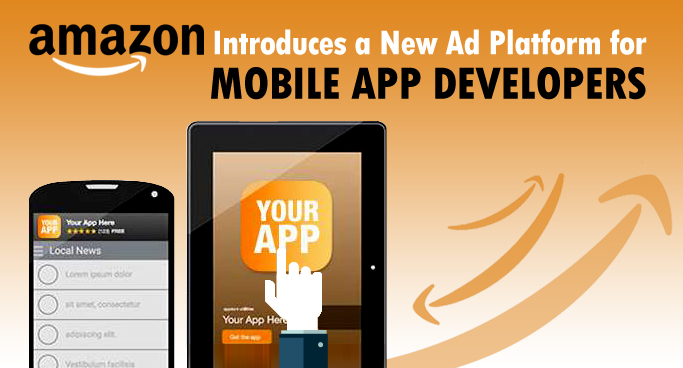 The battle for mobile advertising revenue is heating up, with Amazon.com Inc. launching a new advertising platform for mobile app developers. Through this step, Amazon plans to grab a bigger piece of the Smartphone’s advertising market that is currently dominated by Google Inc. and Facebook Inc. The new platform has been dubbed ‘Advertise Your App with Amazon’and will help developers to promote their apps on Android devices and Amazon tablets. Amazon is a small player in the $28.7 billion U.S. mobile advertising industry with less than a 1% share of the market, compared with Google’s 35% and Facebook’s 17% market share, according to EMarketer Inc. Marketing budget for apps alone is projected to rise to $3 billion this year, up by 80% from the last year, with Facebook expected to lead the market. As per the company, the new campaign takes less than 90 seconds and requires an investment of $100 or more. The developers will be charged only when a user clicks on an ad. Amazon hasn’t disclosed the installed base of Fire tablet users. It says that the ads have the potential to reach millions of customers. Amazon hopes that by providing an exclusive platform to developers to showcase their apps, it could make its devices and services more appealing to shoppers. The developers will be able to promote their apps across Amazon’s network of Fire tablet wake-screens, as well as via mobile placements on the Amazon Mobile Ad Network. The program focuses on the developers who are looking to win loyal users for their app. Amazon’s ads will appear right on the Fire tablet’s wakescreen, making it almost impossible for consumers to avoid, unlike a News Feed ad. This is for those developers who have optimized their apps for the Fire tablet to try acquiring only Fire tablet users. Also, the ads will run on other Amazon mobile properties by way of the Amazon Mobile Ad Network, and may even appear within other Amazon apps, like IMDb. The new platform will allow developers to target users based on their interests. While setting up the campaign, developers will get the option of selecting types of users they want to target through specific check boxes. They will also have the option to ask Amazon to choose users for them. There will be an option called “Enable Google Play Support”, through which customers who don’t have access to Amazon Appstore will be allowed to use Google Play store to download the app. As stated above, creating a campaign will not take more than 90 seconds. Developers will have to select their app and then preview the auto-generated ads. They will then be required to set details of their campaign, select the payment option and submit their campaign to Amazon. Ads displayed should meet certain guidelines in terms of content and should be approved for all audiences. Moreover the apps being advertised must be available in English Language. Semaphore Software is a leading mobile apps development company, delivering powerful and elegant apps to various industry verticals across the globe. Get in touch with us through info@semaphore-software.com to connect to our mobile app developers, experienced in building innovative mobile apps on all major platforms including iOS, Android, Windows and BlackBerry!