6 Things You Should Definitely Know About PHP7 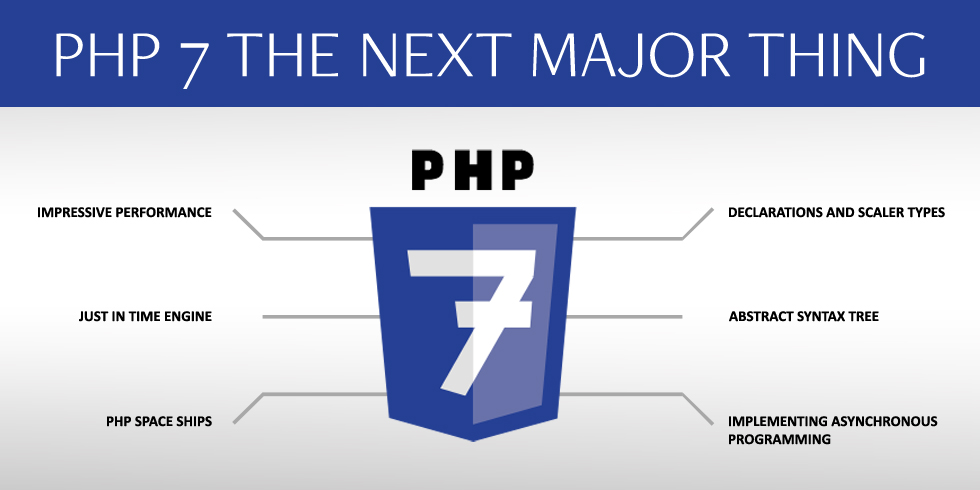 After much debate, it’s finally settled that the new version of PHP would be named PHP 7; it is the next major version to be released after PHP 5.x. It has already brought over a lot of speculations from different quarters. After the not much appealing version 6, version 7 will definitely be something to look forward to. There are many eagerly waiting for the next major version, specifically after the debacle of the version 6. Many call it the curse of language version 6, which has affected the Perl language too. The new version would be released sometime end of 2015, or beginning of 2016. Speculations have it that the version would be released somewhere around October or November, but a specific date for the release is yet to be decided. The final feature set to be released with this version is almost ready. Here we will offer some insights on few of the features that you ought to know about PHP version 7.

Just by upgrading to the newer PHPNG, without adding any new lines to the code, you can get massive performance outputs. The gains that you will achieve from this upgrade are impressive. You are surely going to get the same level of output performance that Facebook HHVM offers with the next gen PHP. With this improved performance, the speed of receiving output has doubled for PHP.

The main purpose behind developing the open source PHPNG was to implement the JIT engine for the Zend based PHP. With the JIT engine feature added to PHP 7, the Zend opcodes would be dynamically compiled into a native machine code, which would enhance the speed of the code, thus improving the performance and speeding up the implementation. As of now, the JIT engine has not been included in PHPNG, but you can expect it to be a part of PHP 7.

With the new version, a new operator is also being introduced. < = > is the new operator is used for combined comparisons, specifically for sorting. This can be called similar to TIE fighter.

This would position as the intermediary step for PHP compilation. With this, there is a potential for more optimizations that would help improve the speed of PHP. With this, there is a scope to pull in AST to PHP extensions which would further open gates for including interesting tools like static code analyzers that will detect and remove bugs.

In the new version, developers can declare the return type of function they want to include. With this, the argument type hints as well as the new return type declarations support the new scalar type functions. With this the developers can denote whether they are expecting a string, float, int or bool to be returned in the output.

The future of PHP will be changed with the refactoring PHP I/O multiplexing layer. With this, you will be able to take care of event handling with ease. All the processes related to I/O as well as other asynchronous tasks like accessing files, networks, databases etc. will become easy. Easy execution of parallel tasks within a single request will be made possible, which will strengthen the performance of PHP as a whole. There are a lot of speculations doing round on this latest version of PHP. The whole development is a result of the fierce competition that Zend received from Facebook HHVM. Only the release of the version will account for a true picture of the new version and its features. Semaphore Software offers tailor made PHP solutions. We keep ourselves abreast with latest versions to offer solutions with current technologies to our clients. To get in touch with us for PHP solutions, contact us via info@semaphore-software.com