10 Reasons Why You Should Hire iOS App Developers from India!! 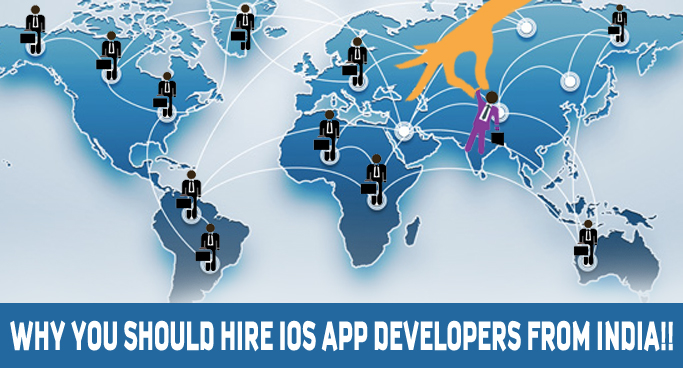 iOS has a huge market in the developed countries like US, UK, Canada, Australia, Germany, France and many European countries. Various surveys have shown that iOS users are ready to spend money in the App Store for downloading and using Paid iOS apps and are much more engaged in comparison to users of the other platforms. A lot of companies in these countries are into the business of developing iOS apps, to tap the lucrative market, but you can reap more benefits, by getting your iOS Apps developed in India. To avail the benefits offered by iOS platform, Apprenuers in the developed countries prefer to build apps for the iOS devices. And for the same purpose, they require iOS developers that can build unique and downloadable iOS apps and are capable enough to meet the changing demands of the iOS customers. The problem however lies in hiring a pool of technical staff at cost-effective rates as the onshore developers charge higher rates than most in the Asian countries or offshore teams do. This makes them explore Indian market which is well-known for skilled engineers and having mastery in development process. Below stated are the reasons why hiring iOS developers from India can turn out to be a beneficial deal!

You gain complete control over the professional team of developers hired from India. The team works dedicatedly on your iOS project as per your convenience. You can plan, strategize and give directions for how development should take place. This allows you to retain full control over the operations, processes as well as on the team.

The most obvious benefit of hiring iOS developers from India is cost-saving. iOS app development is expensive as it involves cost of hiring and training developers to create high-quality apps to pass the Apple’s Guidelines. Outsourcing can help in reducing development costs as it excludes recruitment & training costs and employees’ compensation.

As compared to other countries, the value of Indian Rupees offers a greater benefit to the Apprenuers based in US, Canada, Europe and Australia. The currency difference serves as a catalyst to get affordable iOS apps built from India.

Indian programmers are highly skilled, having in-depth knowledge of iOS platform. Companies get access to industry veterans holding years of experience in developing apps that can help their app to stand out from their competitors. iOS developers in India are abreast with the latest technologies, working on latest iOS tools and offering benefits of the enhanced features of iOS 8.

You will not have to worry about managing the resources yourself. The iOS development company in India will do that for you. You can focus on important business activities and only review the project’s progress by receiving regular updates and detailed reports.

The Indian iOS programmers are well versed with English written and verbal communication. They have better communication skills in comparison to many other countries due the wide acceptability and use of English all over the country.

The iOS developers in India effectively remove the constraint of time-zone. They are there for the Apprenuers of developed countries in their suitable and convenient time, overcoming the barriers of time difference. The work of Indian iOS development companies don’t stop after deploying the app in Apple Store. They are there for you even at odd hours to provide seamless support through various communication channels. This attitude and dedication of the developers, place India ahead of many other countries.

Indian iOS app development companies are well-known for providing customized services to outsourcing companies. The iOS developers make an in-depth study of the app requirements, give their suggestions for improvement and deliver tailor-made iOS apps.