iPhone or an Android app- Which to Launch first! 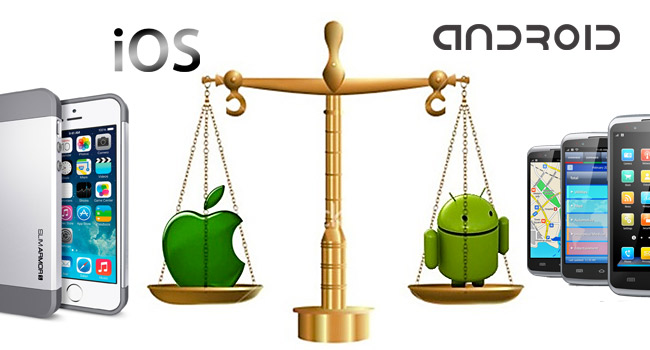 Mobile apps are on a boom with aspect to development as well as usability. Every smartphone user is more focused on exploring and downloading the most trending and useful applications to their day to day needs. With such crazy response by the Smartphone users, the developers community and large corporate, come up with useful and outstanding applications on iPhone and Android.

When there is talk about having a mobile application for business or entertainment, the big confusion is which platform should be targeted first for development. In 70% cases, the corporate client is interested in developing first for the iOS or iPhone platform and then taking up the Android platform development.  Even for cases where both platforms are being developed simultaneously, the first preferred platform is iOS for testing the user interest and app functional features. Only in rare cases do we hear from clients that they would like to start with an Android app for their business.

Few reasons as why iOS is the first choice of development platform:

An iOS app generates higher Revenue compared to an Android app.  Market survey of 2013 done on top 200 Apps from both stores states, Android leads iOS by 10% -15% in app downloads but iOS nets in 5 times the revenue generated by Android App sales. Therefore, those that aim to generate revenue from Smartphone Apps tend to choose iOS over Android as the preferred platform.

Android has more than 1000+ devices in the market with varied resolutions, screen size and OS variants while Apple has 4 to 8 variants. Thus development especially UAT of apps on Android takes more time and pushes the costs northwards. Also Android OS has more releases over the period of time making it a high risk delivery at time of launch.

The biggest risk of Android App deployment is; even if a app is launched with multi device UAT, it is difficult to promise a bug free app on all devices as each device needs separate fixing for the app to work on a particular device. There is never a surety of having 100% quality app on all the Android devices in the market.

The development team developing the mobile apps prefers to develop an iOS app ahead of an Android app. iOS development is easy to develop in terms of features Apple comes up with periodically. Secondly iOS has more libraries available for integration compared to Android due to iOS’s wide acceptability over the years. iOS has ObjectiveC as the base platform which is more powerful and intuitive compared to Java for Android.  iOS has a better Integrated Development Environment (IDE) namely Xcode which has advanced features compared to Eclipse of Android. iOS sports an inbuilt (in xcode) memory lickage detection while in Android we have to use Test-n-Study methodology, thus consuming high time for stabilizing an application post development.

OS Fragmentation is one of the biggest problem in Android, 70% of iPhone users are using latest iOS version while less than 10% of all Android users are running the latest version of Android OS. Apple adopts a consistency and efforts to make the user upgrade their device OS. This also makes easier for developers to decide app compatibility to OS version. In Android, more than 50% of the users are still using OS ver 2.3 which was launched way back in 2010.

iOS and Android stands equal in terms of app availability but even today after 7+ years of Smartphone wide availability, Android today still misses some popular iOS apps in its Play Store. Widely used Instagram was launched on Android 18 months after its success on the iOS platform. Android does stands ahead when it comes to app downloads and market share however iOS app generates better revenue and provides a better option for Go-To live of a new concept.