10 Reasons why One Should Develop an Android App First 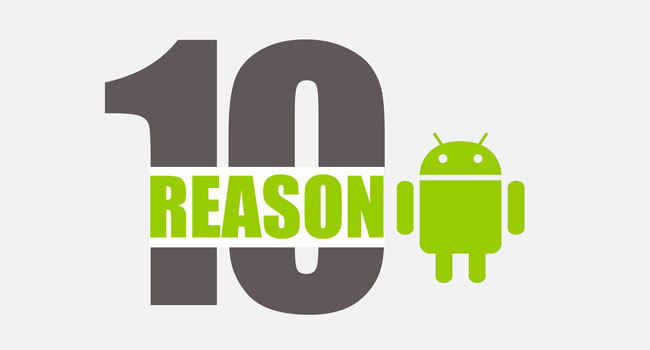 There are more Android devices in the world than iOS as Andorid devices are much cheaper than their iOS counterpart. A research indicates that the Android platform is larger and growing faster than iOS, as of today, Android holds 48% of the smart phone market according to Nielson. According to another research, there are nearly 1.3 million Android devices activated each day.

3. Open marketplace for distributing your apps:

Google Play is a premier free marketplace for selling and distributing Android apps. When you publish an app on Google Play, you reach a huge user base of Android. The app can be quickly deployed as Google does not have App Review policy and your App becomes visible on the store on 2 to 4 hours. Beyond growing your customer base, Google Play helps you build visibility and engagement across your apps and brand. As your apps rise in popularity, Google Play gives them higher placement in weekly “top” charts and rankings.

This great platform offers high built-in support for powerful 2D & 3D graphics that help business & other organizer to attract million of users to their mobile applications. As we all know that high quality graphics plays a very significant role in Applications. High graphics allow developers to expand application with maximum number of features.

Android is a highly flexible OS that allows developers immense flexibility when it comes to developing android applications. Android offers more flexibility with its apps by allowing Firefox, Opera & Chrome to run. Also Open Source libraries can be used within the framework without worry of rejection.

Android developers save money, because the platform is not licensed. However, there are numerous programs presently coded in the platform as its devices are utilized by various people worldwide. It allows using different programs without paying any certification fee.

An App is not going to sell on its own, without marketing efforts, you are just like a small fish in a big ocean and you will remain unnoticed and would eventually die or get eaten by other fishes. So, to have a successful app, requires promotion and marketing resources. Here, the less crowded market provides has an edge – it is significantly cheaper to acquire a new customer on Google Play. Fiksu recently conducted an analysis of available advertising inventory which revealed that Android is able to deliver 12 percent more ad inventory than iOS. Android has a standard mechanism for marketing that resembles with the desktop marketing mechanism. Android automatically provides referrer information that anonymously identifies the source of a download, so the solution for tracking performance through analytics is already build in.

The word ‘attribution’ in the App world refers to the measurement of how user activities or actions such as installs, downloads, in-app purchases, repeat launches and many other features are prone to effect by marketing activities. Apple is no longer accepting apps that access Unique Device Identifier (UDID) technology and reports suggest it is also rejecting apps that use HTML5 cookie tracking. iOS uses several matching mechanism to match the user data between Ad networks and marketers. Android automatically provides the referrer info and its mechanism is explicit.

9. Transition to Other Platforms:

Android applications can be easily transited to Amazon & Nokia X App platforms. Amazon’s app store is based on Android and therefore it allows developers to easily submit a build to Amazon for approval. What is particularly interesting here is that recent research shows the Amazon store users monetize better than the App Store and Google Play.

One who has the ability to evolve is more likely to survive in the App world. Google Play serves as the perfect playground for all those developers who are in new in this business; it allows developers to react to customer feedback quickly and enables them to update their App in a few hours. On the other hand, apple’s app store frequently consumes around a week to get an App updated, and sometimes it requires resubmission of an App. Hence, Google Play is a heaven for all those who wish to update their app rapidly in accordance with customer feedback. The android allows you to test and refine your app so that you can get the maximum output.